Retro Review: Under the Green Star by Lin Carter

You may be wondering why I used a concept image from the movie Avatar in the header of this review.  Keep reading . . .

On a science fiction group I regularly haunt, someone posted a picture of this book saying they were about to read it and that many of it’s elements found their way into (or influenced) the movie Avatar.  Having read some Lin Carter in an indirect way (his Conan tales that acted as filler in the Ace editions), I was intrigued, and did what any seeker of obscure, retro science fiction does . . . I fired up Ebay.

A few days later I held in my hands the entire Green Star series, comprised of six musty smelling, but in generally very good shape, Daw first printing editions . . . and for the right price!  The first book in the series is, naturally, Under the Green Star.

Much of what I’d researched concerning the Green Star series was true, at least after having read the first book.  It’s a straight up sword and planet pastiche reminiscent of Edgar Rice Burroughs‘ Barsoom series (and others), but written some 40 years after that genre was made popular.  Many people pass it off as a ripoff of the genre without digging deeper.  In the first printing version of the book there’s an afterward where Lin Carter extols the works of Burroughs and cites him as the reason he pursued writing as a career. As such, the entire Green Star series was written as, essentially, a fanboy love letter to Burroughs and the genre he created.

Under the Green Star is not a ripoff . . . it’s a well documented and deliberate homage. Regardless, many still believe this detracts from the work and doesn’t let Carter off the hook even though he fully admits he’s copying the style and tropes for a reason.

Taking this into account while reading goes a long way in changing the way I approached the book.  While it is (deliberately) derivative of such sword and planet heroes as John Carter (Mars series) and later Dray Prescot (Scorpio series), there was something primal and base about reading Under the Green Star.  It’s not complicated; it’s not bogged down by a deluge of unnecessary narrative; it’s clean, fast, and to the point. On the other hand, it’s not particularly good science fiction literature; it’s not original (as previously mentioned); it’s not even that well written.

But the one thing it is? Fun.  Yes, I admit it, I had fun reading this short novel and sharing the exploration, mystery, and adventures of the unnamed hero.  It whisked me back to my childhood, ensconced in my warm bed during a cold winter day, reading a copy of A Princess of Mars for the first time. Positive nostalgia is a strong sentiment ingrained in humans!!

Under a Green Star has all the hallmarks of the genre: an Earthly hero is whisked away to another planet only to become the overly chivalrous hero; there’s a beautiful damsel in distress, usually a princess of some kind; there are weird and exotic creatures, environs, and cultures; there’s a shadowy antagonist; and finally just at the last moment, when it seems the hero might save the day, he’s whisked back to Earth leaving us contemplating outcomes.  Under a Green Star has all of these classic sword and planet elements, including a writing style that mimics (yet does not wholly match) Burroughs’ classic style from his ground breaking Barsoom and Tarzan novels.

In the tale we have an unnamed and affluent character who dreams of living a life of adventure, for he was stricken with polio as a child and bound to a wheelchair as an adult.  Through his wealth and idle time he learns to master the lost Tibetan art of “soul casting” with which he uses to transport his persona first to Mars, then eventually to a green star that catches his eye.  He eventually enters the body of a mighty hero on a mist enshrouded planet covered with a thick jungle comprised of miles tall trees. 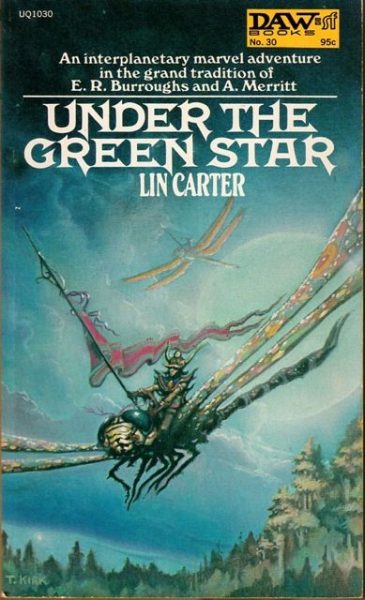 Under the Green Star

On Earth, forever bound to a wheelchair, life held for him only the fate of a recluse — confined to daydreams and the lore of ancient wonders but apparently destined never to share them — until he found the formula that let him cross space to the world of the Green Star. There, appearing in the body of a fabled hero, he is to experience all that his heroic fantasies had yearned for. A princess to be saved . . . an invader to be thwarted . . . and otherworldly monsters to be faced!

This the the point when my Avatar meter started ticking, so I took some notes during the read to compare elements of Under the Green Star to those in Avatar:

I’m making absolutely no claim that Avatar is a re-telling of Under the Green Star.  There are vast story differences between the two, but there are also uncannily similar elements to both tales.  It’s clear the James Cameron borrowed from a large collection of material to create Avatar, he’s even on record mentioning Edgar Rice Burroughs’ Barsoom milieu.

On the movie Avatar:

The big irony of this film is, you know we’re doing this story that takes place out in the rain forest, a very simple story, almost classic in a sense, almost an Edgar Rice Burroughs kind of adventure, and yet it’s being done with the most advanced technology in the history of film. So there’s this weird juxtaposition.~James Cameron

Cameron may offhandedly reference the work of an author who created the sword and planet genre, but it seems clear to me that at some point in his past he (or his staff) dug deeper into that same genre for inspiration related to setting, action, fauna, etc.  As I eventually read through the rest of the series I will make an attempt to document any additional similarities.

Under the Green Star by Lin Carter is not a ripoff, it’s a deliberately derivative fanboy love letter to Edgar Rice Burroughs and the sword and planet genre he created.  It’s not original, or well written, but it is, well, kind of fun . . . in a nostalgic, adolescent kind of way.  We all have guilty (nerdy) pleasures. Similarities to Avatar abound.