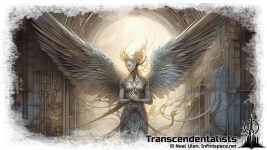 The Mortalist and Transcendentalist belief systems arose as a gradual collision of ideas and values between human factions during the ~250 years between the beginning of the Digital Dark Age (2043 CE)..., flee Earth taking all of their advanced technology with them … never to be seen again. Their action, combined with the end of the war, see many people fleeing a devastated Earth.