Review: The Children of Húrin by J.R.R. Tolkien

The Children of Húrin by J.R.R. Tolkien is a work of fantasy that will not be, and perhaps is not capable of being, appreciated by all who read it.  In a time when novels cater to the masses by being immediately accessible, both thematically and linguistically, an expertly crafted tale such as the one J.R.R. Tolkien has constructed here is going to suffer from the opinions of those who are expecting lighter fare from their books.  This includes the wrath of critics who may have been assigned a book that they have absolutely no interest in reading.  After all, high fantasy of this nature is not a mainstream genre and is not universally accepted even among some fans of the genre.

It is not an easy book to read.  Professor Tolkien’s prose and vocabulary lean toward the archaic, much more so than The Lord of the Rings. The words do not flow smoothly across the page and the reader must put forth more effort than is normal compared to reading books containing modern prose, or books not penned by authors known to invent their own languages.   Tolkien’s penchant for using elaborate and cumbersome names (e.g. Haudh-en-Ndengin) can be a stumbling block for some readers, but for others it breathes life in to lifeless pages and helps create a fully realized world for his characters.  The words are not made up but are based on languages he created for his setting. 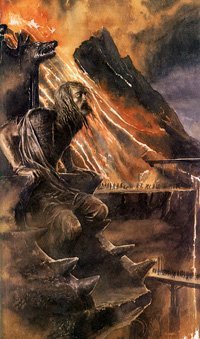 The Children of Húrin is not filled with characters you want to necessarily love…or even like.  It’s populated with dark, flawed, and morally lost characters.  Yet in the end you can sympathize with nearly all of them.  This is not a happy tale.  The themes and circumstances are dark and unforgiving.  The reader will not put this book down with a smile on his/her face.

This is a Shakepearean level tragedy set in Beleriand, a land to the far west of the Middle-earth most casual Tolkien fans are familiar with.  You will find no Hobbit parties in this land.  It was a land so besieged by war that the final defeat of Morgoth (Sauron’s master) sank it in to the sea approximately 6500 years before Frodo tosses the One Ring in to Mt. Doom.

How did this tragedy unfold?  I will not spoil it except to say that Húrin (a human) visits the hidden Elvish city of Gondolin.  Morgoth captures Húrin after an epic battle but he refuses to reveal the location of Gondolin.  Morgoth places a curse upon his family and with his power binds Húrin to a stone chair near the summit of Thangorodrim.  Húrin could not move from the chair or die until released.  Morgoth then used his power to allow Húrin to see and hear all that he did, and he kept Húrin shackled to the chair for 28 years under his curse and control as he watch the fate of his family unfold.  That is the tale of The Children of Húrin and I’ll leave it to the reader to discover the rest.

The tale is significantly shorter than The Lord of the Rings, weighing in close to the length of The Hobbit.  It is beautifully illustrated throughout by the talented Alan Lee, and includes an appendix, a list of names (I recommend not referencing this while reading), family trees, and a full fold out map of Beleriand. 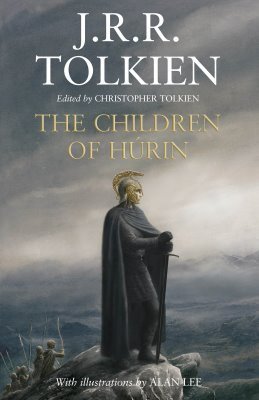 “Upon all who you love my thought shall weigh as a cloud of Doom, and it shall bring them down into darkness and despair. Wherever they go, evil shall arise. Whenever they speak, their words shall bring ill counsel. Whatsover they do shall turn against them. They shall die without hope, cursing both life and death.”

A version of The Children of Húrin appeared in Unfinished Tales, but it is greatly expanded here by J.R.R. Tolkien’s son Christopher.  The main protagonist in the story is Túrin Turambar who wanders Beleriand in search of himself after his family is torn asunder when his father is taken captive by Morgoth on the battlefield.  Túrin’s adventure spans many years and is a full of betrayal, suicide, murder, treachery, incest, creatures, battles…and over it all looms Morgoth and his curse.

I loved this book.  Writing this review is giving me the yearning to read it again.  The combination of Tolkien’s prose and Alan Lee’s art immerses the reader in a fantasy world that truly feels vast and ancient.  For me the feel of the book resides somewhere between The Silmarillion and The Lord of the Rings.  It’s a Tolkien “history” told in a more traditional form than that of The Silmarillion.  The Children of Húrin is not for the casual fantasy fan, or even the casual Tolkien fan. But if you’re a fan of gut wrenching tragedies…you should love it.

One final word of warning:  Do not scan the table of contents unless you want to be spoiled.  You can guess how it all ends, but if you want to save the details for the reading . . . don’t do it!