That last time I posted an article about Neal Stephenson it was after reading his monstrous, brilliant, and, some would say, inaccessible novel Anathem.  In that review I point out this possible inaccessibility linked to obscure ideas and concepts such as:  alternate timelines, how information/ideas travel between Hylaean Theoric Worlds, causal domains, multi-cosmi theories, and a mini-dictionary of made up words.  All fascinating and brain aching in a good way for most Stephenson fans, but genuinely off putting for casual fans of speculative fiction.

By comparison Seveneves may very well be Neal Stephenson’s most accessible novel, even while weighing in at nearly 900 pages.  It’s not cyberpunk (Snow Crash), it’s not postcyberpunk (The Diamond Age), and it’s not historical fiction (Cryptonomicon or The Baroque Cycle).  What it is is a grandiose piece of speculative fiction with its feet confidently straddling that line between science and fiction.  It’s full of huge concepts that challenge the imagination while not being muddle with esoteric metaphysical concepts, that for many, bogged down Anathem.  It’s a book you can sink your teeth into and comprehend . . . as long as you understand, as with all his books, that you’re still reading a work of Neal Stephenson.

What that means is many fold.  First, the reader must be patient.  The plot of Neal’s books often start as small rolling snowballs on a hill with just a sprinkling of the white stuff, but just as often end as a juggernaut sized snowball roaring towards the finish line.  Second, you must have a penchant for wading through massive informational (scientific) info dumps.  More on this later.  And thirdly, you have to steel yourself for the inevitable Stephenson ending, which, more often than not, leaves the reader wanting more.  If you can manage through the Stephenson Trifecta of Storytelling™ you’ll be rewarded.

At its core Seveneves has a very simple premise:  what happens to humanity when a mysterious “agent” shoots through the moon causing it to break apart?  The answer, or at least Stephenson’s answer, is vastly more complex than the premise.  His answer is basically set up in three parts, as is the structure of the novel.

This is the novel’s setup, the premise made manifest in a scant 225 pages.  The eventual impact, to Earth and humanity, of the destruction of the moon.  What steps are necessary to put in place to save humanity?  Who should be chosen to save humanity?  And where should we go?  Space?  Underground?  Underwater?  Space, naturally, since Seveneves takes place in a very near future fictional Earth, and the incoming “hard rain” from much of the Moon raining back to Earth makes any terrestrial based option seem foolhardy. 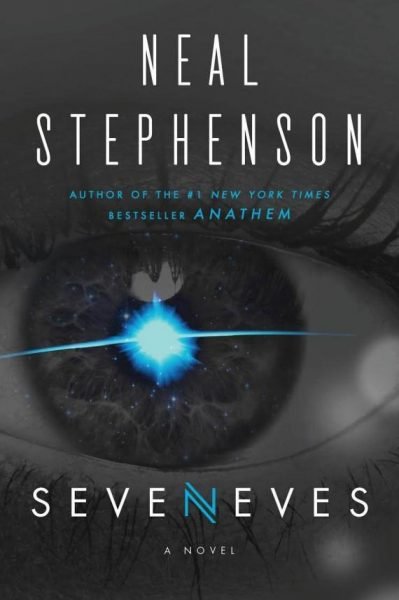 What would happen if the world were ending?

A catastrophic event renders Earth a ticking time bomb. In a feverish race against the inevitable, nations around the globe band together to devise an ambitious plan to ensure the survival of humanity far beyond our atmosphere, in outer space.  Five thousand years later, their progeny—seven distinct races now three billion strong—embark on yet another audacious journey into the unknown . . . to an alien world utterly transformed by cataclysm and time: Earth.

With a foothold in space established and seven billion souls dead on the surface, how do 1500 people launched into orbit ensure the future of humanity?  How do they survive the hard rain?  How do they survive each other in order to make it the 5000 years it will take before Earth can be inhabited again.

A jump of 5000 years in the future shows just how tenacious life can be, both in orbit and on Earth.  Humanity has built a massive society in orbit and begun exploring options of returning to the surface.  But there’s a snag:  others are already there.

The title of book is taken from the Council of the Seven Eves . . . the seven women who remain at the end of Part II.  Without these “seveneves” there is absolutely no chance for humanity to survive, and through creative genetic science they are able to procreate, without the need for men.

Seveneves is full of Stephenson’s manic speculative fiction genius.  He clearly does his research and uses his talent to project into the future, especially with respect to the Habitat Ring housing most of humanity 5000 years in the future.

This is when the problem occurs (for some readers).  Stephenson’s manic scientific info dumps will be very off putting for many readers.  It’s the sole reason I didn’t give this excellent book five stars.  Here’s why.  Stephenson (or his editor) insisted that these exhaustive info dumps, sometimes lasting 5, 10, 20 pages of massively dense text, be placed right in the middle of storytelling narrative and/or dialogue.  There are several instances of characters engaged squarely in plot moving dialogue only to be abruptly interrupted with fifteen pages of science, at which point Stephenson returns us right back to the middle of the conversation.  It’s jarring and interruptive.  The entire book would have been better served by moving some of these passages to more appropriate areas of the narrative, or to just place them in an appendix with direct reference within the text.  Seveneves is great, but it’s pace suffers greatly from poor editing choices.

Neal has a history of having, shall I say, less than stellar endings to his novels.  In this case I’m perfectly happy with the ending.  It ties up loose strings tight enough to not be frustrating while at the same time leaving open the possibility that we get a sequel.  Does it need a sequel?  Absolutely not.  Seveneves stands brilliantly on its own.

As further proof that Seveneves is possibly Stephenson’s most accessible novel, Skydance Media has picked up the rights to develop the book with director Ron Howard at the helm.  How they will derive a script from Seveneves, without significantly altering the source, still hasn’t dawned to me . . .