Company man, ad man, star-class Mitchell Courtenay is living a lie.  He exists in a world where everything and everyone has its place and function.  Consumers consume.  Producers produce.  Ad men sell.  It’s a circle of symbiosis that’s served the world well since the failure of government.

What’s the ultimate sell?  Selling the unsellable of course.  Mitch is one of Fowler Schocken’s top ad men, and he’s just been put in charge of selling the unsellable . . . convincing people to settle the hellishly inhospitable planet of Venus.  But everything he thinks he knows about the world he confidently moves through is about to be turned on its ear.

What Mitch comes to realize is the following:

The path to this enlightenment leads him to the wastes of a fog bound glacier, Costa Rica, the Moon, New York City, and the seats of Congress. 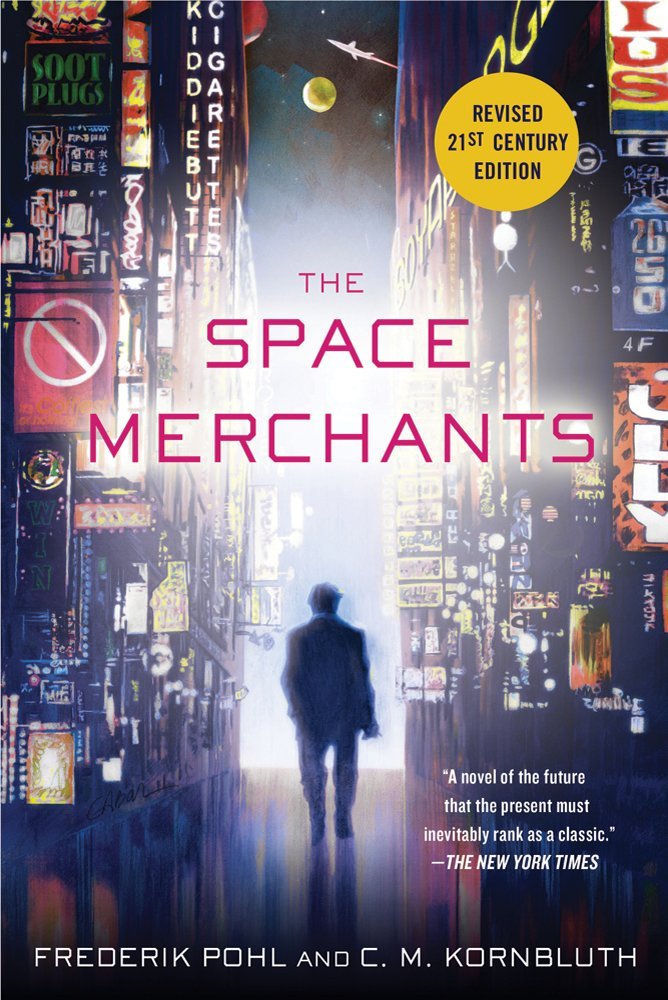 The planet Venus has just been visited and judged fit for human settlement, despite its inhospitable surface and climate; colonists would have to endure a harsh climate for many generations until the planet could be terraformed.

Mitch Courtenay is a star-class copywriter in the Fowler Schocken advertising agency and has been assigned the ad campaign that would attract colonists to Venus, but a lot more is happening than he knows about. Mitch is soon thrown into a world of danger, mystery, and intrigue, where the people in his life are never quite what they seem, and his loyalties and core beliefs will be put to the test.

The Space Merchants reads a little bit like a mashup of Mad Men and a futuristic spy novel.  It was Frederik Pohl’s first published book that he started writing during World War II, tossed in a fire, restarted, and eventually finished with the help of C. M. Kornbluth.  Unfortunately neither author is with us anymore.  Pohl recently passed away, and Korbluth died tragically in 1958 at the young age of 34.  But they’ve created a story that is, even though the narrative reads as a bit dated, still relevant . . . even sixty years later.

Narrative passages aren’t particularly descriptive, but this is a trait of science fiction books penned by earlier generations.  They leave much to the reader when it comes to imagining the world their characters live in.  Pohl and Kornbluth created a world where corporations hold seats in congress, and where spaceships are designed and fabricated by “Walmart’s Kitchen Appliance Division.”  Yes, you  read that right.  It’s all heavily satirical and not meant to be taken completely seriously.  I did find myself chuckling several times throughout.

While reading The Space Merchants and soaking in the world where corporations own everything, weird combinations of corporations have sprung up, and people hold jobs based on the level of intelligence (or lack thereof), I couldn’t stop thinking of the movie Idiocracy.  I know there’s no direct comparison, but there are many parallels (aside from the advertising aspects).  But, a little research has revealed that Idiocracy seemed to be influenced by Kornbluth’s The Marching Morons (which I’ve not read).  So some of his ideas must also be present in The Space Merchants for me to see a connection in this book as well.

The Space Merchant was first released as a serial titled Gravy Planet.  Over the years Pohl updated it to keep it fresh with respect (I suspect) to corporation names.  Below you can find a gallery of the Gravy Planet art that appeared in the original serial.

The Space Merchants is still as satirical and relevant today as it was sixty years ago, and it’s one of those books that readers of science fiction classics are obligated to pick up and read at some point.

Review: In the Ocean of Night by Gregory Benford

The Art of Francis Tsai
Next