Review: The Songs of Distant Earth by Arthur C. Clarke

In the Songs of Distant Earth by Arthur C. Clarke Earth is destroyed in ravaging solar fire when the Sun goes nova in 3620.

How does a race prepare for and accept its demise when it has almost 1500 years’ notice?  One would think that Arthur C. Clarke would approach a premise like this from a technological or end of the world angle.  But he doesn’t.  He approaches it from a human angle.

It’s easy to get caught up focusing on, and reading, only newly released works, but no matter how much science fiction one reads it’s always good to revisit the masters.  Arthur C. Clarke is one such master.  With The Songs of Distant Earth, he creates a somber, yet hopeful, future in which humanity has lost its home and is slowly crawling its way across the galaxy.  Clarke has gone on record stating that The Songs of Distant Earth is his personal favorite novel among his works.

The novel doesn’t detail the lead up to and the ultimate destruction of Earth, instead it focuses on the human aftermath of such a cataclysmic event.  In the year c.2050 scientists discover that the Sun’s stability is degrading and will eventually go nova.  Humanity hatches a plan to populate the galaxy via DNA diaspora

Following the end of the Transcendence War (2300-2310 CE), the remainder of humanity flee Earth for other stars, establishing colonies under the protection/preservation of various corporate entities t... (self-replicating Von Neumann seed ships) and eventually generational sleeper ships.  One aspect that Clarke doesn’t address is how humanity sets aside its mutual hate, prejudice, greed, and intolerance to work towards a common goal.  That may be a more difficult task than colonizing the galaxy itself!!

The year is 3827 and Earth has long since been consumed by nuclear fire.  The sleepy planet of Thalassa (named after the Greek goddess of the sea) is the product of one of the hundreds of DNA seeding missions sent out many centuries earlier, and its inhabitants are living in a society free of hate, prejudice, greed, intolerance, and yes . . . religion.  This is an interesting aspect that Clarke interjects into the narrative, as it seems clear to him that humanity would not suffer many of these maladies if religion was not present.  But Thalassa possesses the more positive aspects of all human knowledge and is far from a primitive society, reaching a state just short of spaceflight.  Thalassa is a small world completely covered with oceans possessing only three small islands to hold all its inhabitants.

The Thalassan’s live an idyllic life.  The descendants of humanity know they are from Earth and that it has long ago burned to a cinder.  They’ve relegated themselves to believe they are the last humans in existence . . . until the Magellan enters orbit.  The Magellan being the last-ditch effort to take as many of the last remaining living humans off Earth as possible.  One million Earthlings sleep in orbit, while a handful of crew wake and make contact with Thalassa. 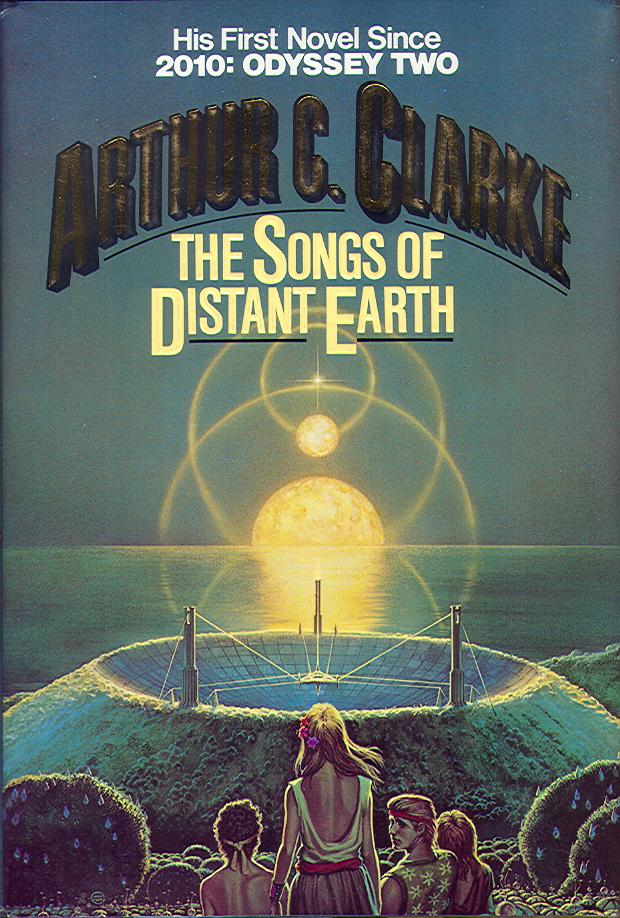 Thalassa was a veritable paradise–home to one of the small colonies founded centuries before by robot Mother Ships when the Sun had gone nova and mankind had fled Earth. Mesmerized by the beauty of Talassa and overwhelmed by its vast resources, the colonists lived in idyllic existence, unaware of the monumental evolutionary event slowly taking place beneath their seas… Then the Magellan arrived in orbit carrying one million refugees from the last, mad days on Earth. And suddenly uncertainty and change had come to the placid paradise that was Thalassa.

How does society react to a ghost that has suddenly appeared on its doorstep, a ghost that has traveled through the cold of space (and taken hundreds of years to do so)?  Naturally the Thalassan’s welcome the refugees with open arms having no preconceived notions of hate, prejudice, greed, and intolerance.  But there’s a problem.  The landmass on Thalassa is far too small to support the addition of millions of refugees.  So the crew of the Magellan determine they will stay on Thalassa for two years while they fabricate a new ablative shield (from ice) for their ship before continuing on to the planet Sagan Two . . . a journey that would take another 300 years for the sleeper ship.

This is essentially when the main timeline of The Songs of Distant Earth really begins, and the tone of it is similar to Mutiny on the Bounty . . . without the actual mutiny.  Though there is a very civil and orchestrated attempt at one.

Clarke takes special care to develop relationships between the caretaker crew and the citizens of Thalassa.  The crew no longer have a home, some of them no longer have families, some have families slumbering in orbit, but that doesn’t keep any of them from developing relationships (platonic and romantic) with the Thalassans.  And isn’t that what would naturally happen when a race is clawing to survive?  Clarke treads carefully though a minefield of traditional values because those religious-based relationship values (monogamy, marriage, etc) seem less relevant when everything you have is gone, your race is nearing extinction, and when your next waking moment may be 300 years from today.

Relationships are formed, relationships are broken, and children are conceived.  Some members of the crew do not want to return to the Magellan and the centuries-long sleep, and instead of fighting against these wishes the captain allows them to stay on Thalassa.  Eventually, the day arrives when the ablative shield is complete and the Magellan must continue on to Sagan.  All those relationships are sundered with the forlorn knowledge that they would never see each other again.  When the crew next open their eyes the people they loved, and the children they conceived would long be turned to dust.  But hope remains because humanity is resilient and will always find a way to survive despite the adversity and heartbreak.

The Songs of Distant Earth was not the novel I was expecting. I was expecting a story about starships, adventure, and far-flung planets.  Instead, I was rewarded with a haunting and touching tale about love, loss, and survival during the last days of humanity. The novel showed me the permanence of the despair of their situation, interjected with a fleeting moment of hope and love.  And isn’t that what the journey of life is like?  At times it’s a terrifying and confusing affair, interjected with moments of profound hope and love.

I can see how this is Clarke’s favorite and most personal work.  Highly recommended.