Visit the virtual paradises of Infinispace. Journey between the stars via hellish Shellspace. And join the battle in Warspace. All spaces are open to you! Tales, short stories, vignettes and world building from my upcoming Infinispace novels … and beyond.

“O God, I could be bounded in a nutshell and count myself a king of infinite space, were it not that I have bad dreams.”
~Hamlet A2.S2

Before delving in to the Revelation Space universe I first suggest perusing the chronology and consider reading the books in order.

This is Part 5 in my series of reviews focusing on the Revelation Space future history books by Alastair Reynolds.

As with most of Reynolds’ standalone novels Revelation Space starts out with three separate plot lines focusing on three central characters, and as the novel progresses the threads slowly intertwine and meld with each other to become one.

Revelation Space spans over four decades of time due to the sub-light travel within Reynolds’ universe.  It takes many years to travel between the stars that have been populated by humanity.  I’ve always enjoyed this aspect of the Revelation Space Universe as it allows for interesting character dynamics and situations.  One must think hard and long before undertaking a trip in this universe because you will likely never see your friends/family again, and the home you return to will be a hundred years removed from the one you left.

Here are the starting points for the major players in Revelation Space.

2524:  Ana Khouri – Ana is an assassin for hire partaking in Shadowplay on Chasm City . . . a game where bored and depraved immortals hire assassins to hunt them for a brief period in order to feel “alive.”  Ana is approached by the Mademoiselle, and shadowy woman who wants to hire Ana to kill someone . . . Dan Sylveste.  In exchange she will re-unite Ana with her husband who she thought was dead.

2543:  Ilia Volyova – Ilia is an Ultra and member of the crew of Nostalgia for Infinity, an ancient lighthugger that used to ferry hundreds of thousands of humans in reefersleep between the stars.  Now the near sentient and kilometers long ship (see below) is decrepit, ancient, and empty except for a handful of Ultras who are searching for the one man who can cure their captain of the Melding Plague . . . Dan Sylveste.  The ship is full of intelligent weapons capable of destroying entire stars, and the Ultras aren’t afraid to use them to get their way.

2551:  Dan Sylveste – Dan is the man of the hour, and a scientist looking for the cause of the extinction of the Amarantin race on Resurgem.  He’s close to discovering what happened to the race, but it’s like an itch he can’t scratch.  There’s more to it than what he’s discovered on the surface.  And unknown to him in 2551 he’s being used by an alien race to test the waters to see if the sharks are gone and it’s okay to jump back in.

2566:  The threads merge – Eventually all of the major players meet and discover something about the Milky Way that shakes their sense of galactic security, and terrifies them to the bone.  It’s a chilling answer to the Fermi Paradox. 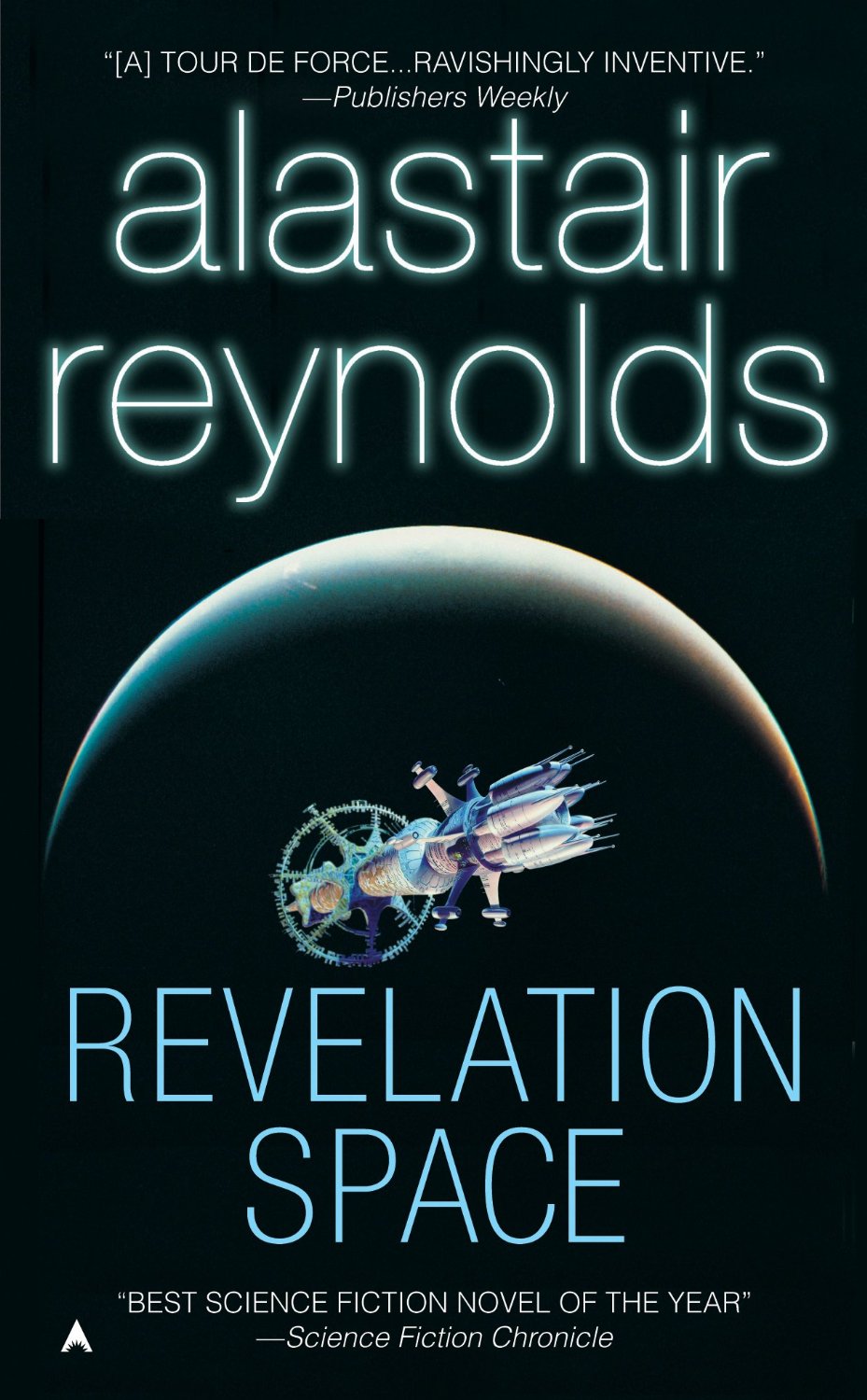 Nine hundred thousand years ago, something annihilated the Amarantin civilization just as it was on the verge of discovering space flight.  Now one scientist, Dan Sylveste, will stop at nothing to solve the Amarantin riddle before ancient history repeats itself.  With no other resources at his disposal, Sylveste forges a dangerous alliance with the cyborg crew of the starship Nostalgia for Infinity.  But as he closes in on the secret, a killer closes in on him.  Because the Amarantin were destroyed for a reason — and if that reason is uncovered, the universe — and reality itself — could be irrevocably altered . . .

Like the other stories/novels in the universe, Revelation Space is a dark, gothic affair littered with atmospheric scenes and encounters.  The most memorable for me are the portions dealing with Nostalgia for Infinity.  It’s one of the most interesting and compelling ships in science fiction.

As Ilia Volyova wanders its echoing, dripping, sludge choked halls the reader is presented with shadows of its former glory and majesty.  A ship formerly full of gardens, wildlife, vast living spaces, and endless chambers of reefersleep pods used to transport hopeful humans to new futures.  The contrast (and reality) is a ship being slowly eaten by the plague of time, and the Melding Plague.  A ship populated with the ghosts of past passengers, and by the ghosts of artificial intelligences.  A shit crewed modified, semi-psychotic Ultras obsessed with the quest to cure their captain.  Where once Nostalgia for Infinity was a symbol of life and hope, it’s now a symbol of death and decay.

It’s very rare that I read a book that presents such a visually impressive setting as those represented aboard Nostalgia for Infinity. 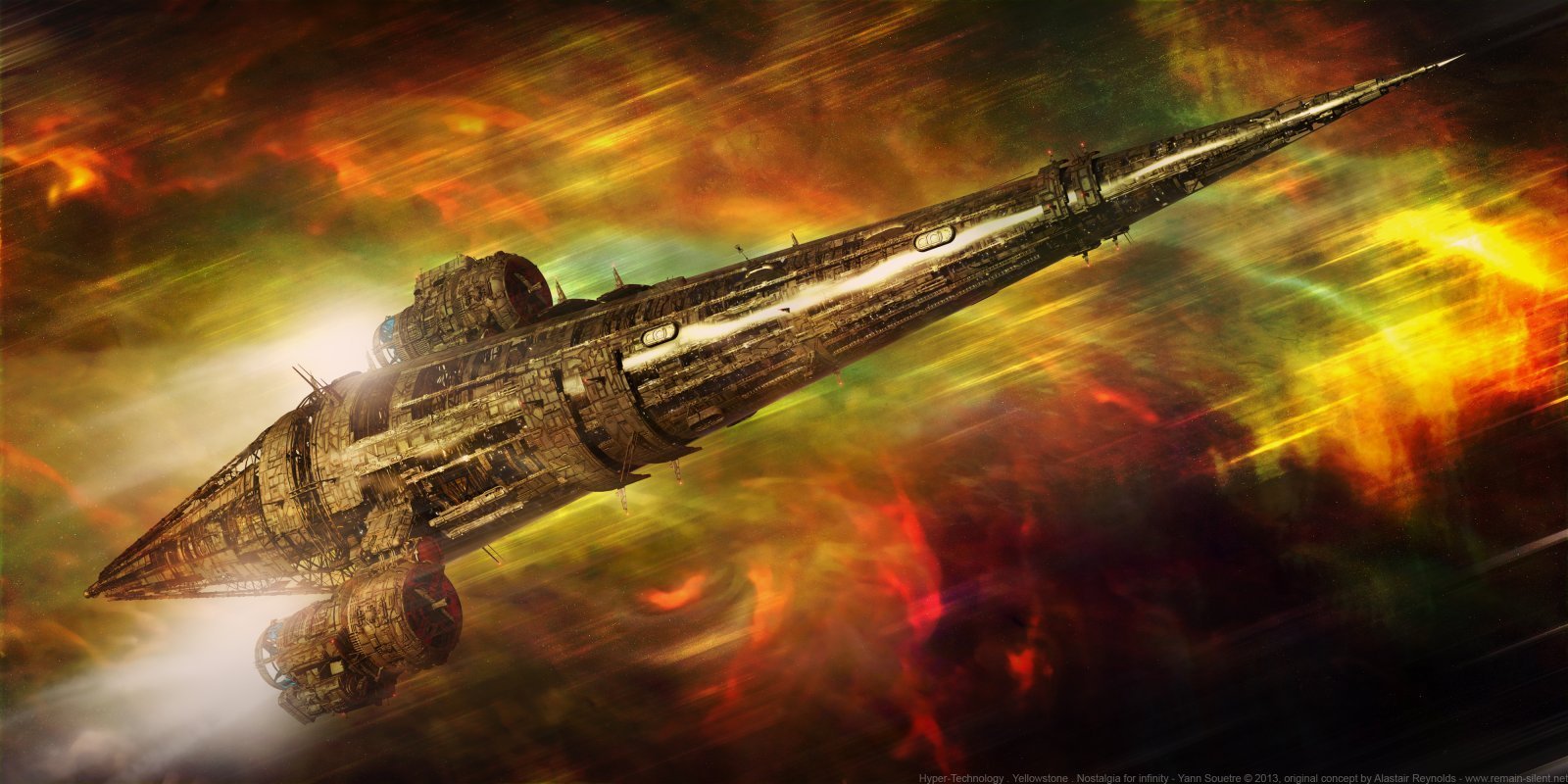 As with most books that focus heavily on concept and world building the characterization is adequate, but not stellar.  This problem stems from a couple factors.  Reynolds is fond of jumping frequently between plot threads, which doesn’t allow the reader to get fulling invested in any one characters.  Also, some of the characters are not who/what they seem.  While this is great for plot twists it leaves the reader (at least this one) wondering:  “Wait, who was I rooting for there?”

Revelation Space isn’t a novel for the casual science fiction reader.  Several times (especially towards the end) Reynolds goes full geek and breaks out a lot of heavy duty quantum physics and astrophysics concepts.  For those readers with patience and a propensity for big concepts and BDOs (big dumb objects), Revelation Space is a novel you can sink your mind in to.  The vastness of its concepts and complexity will keep your mind churning during the read, and well after you’ve put it down.

© 2013-2020, Neal Ulen. All rights reserved.
All images/videos cited copyright to their respective owner(s).