In New Orth, an aut by which an incorrigible fraa or suur is ejected from the math and his or her work sequestered (hence the Fluccish word Anathema meaning intolerable statements or ideas). See Throwback.  (The Dictionary, 4th Edition, A.R. 3000)

Thus goes the definition of the word “Anathem” from Neal Stephenson‘s ambitious and daunting speculative fiction novel of the same name.  It is a derivative of our modern word “Anathema:”

In the case of the events that take place in Anathem nearly all of those definitions apply at some point during the meandering tale.

Like all Neal Stephenson books Anathem is one that makes you think.  You can’t read Anathem with a closed mind.  Stephenson wants it that way, and if you don’t actually enjoy thinking, pondering, or speculating while reading fiction (or during any other intellectual endeavor), you will hate this book.  I mean, really hate this book.  You’ll fling it into the corner in a fit of rage in the first hundred pages.  You’ve been warned.  Because reading almost any of Neal Stephenson’s novels is always an intellectual investment.

I think Neal is okay with that, because the underlying feeling I take away after reading Anathem is that he’s taking a well deserved satirical stab in the back to our modern society.  The contempt towards the anti-intellectualism that exists in our modern society is dripping from almost every page.  It’s not the main message of the work, but it’s there . . . clear as a prism.  Why?  Because we’re a society that feeds on mindless reality television; a society where the line between informative news and faux entertainment is not just blurred, but utterly obliterated; a society where everyone has a jeejah (smartphone) permanently plastered to their face looking up pictures of stupid shit (pancake headed bunnies) on the Riticulum (internet); a society that values and promotes narcissism, cheating, entitlement, and hypocrisy; a society that’s general population are scientifically ignorant, yet are wholly reliant on technology they don’t even understand; a society that has devalued intelligence to the detriment of the whole; a society that would plunge into utter chaos of its precious technological infrastructure were to collapse.  And who would pick up the pieces afterwards?  Who would be capable of sweeping away those inevitable ashes of chaos?

Certainly not the Kardashians (and all their anti-intellectual reality TV watching ilk).  Or the 26% of American’s who still believe the sun revolves around the Earth (according to the National Science Foundation).  Or the 29% of American’s who believe “cloud computing” involves actual clouds (according to Wakefield Research).  Or the large portion of Americans who still believe the moon landings were faked.  Or the 42% of Americans who believe in ghosts, ESP, and supernatural mumbo jumbo, even though there is not one single shred of scientific evidence through thousands of years of human history (Harris Poll).  (sigh) I could go on all day . . . but I’m off in the weeds again, you get the idea.

Nay.  Intellectuals would be our only hope to save humanity, not the lemmings swarming through our society, and the society that exists in Anathem.  And that’s one of the premises of Anathem, one that’s been done before in A Canticle for Lebowitz.  I’ve read A Canticle for Lebowitz, and while it’s a classic I can’t say I’m much of a fan.  I feel that Stephenson’s world is much more interesting and fleshed out than Miller’s.

The world in Anathem is divided into two parts:  the Saecular world and the Mathic world.  The Saecular world is like our modern society:  generally ignorant, scientifically illiterate, and driven by religion and technology . . . neither of which is understood . . . and mindless trivialities like celebrity news, electronic pacifiers (cellphones), and consumerism.  The best way to describe the Mathic world is by comparing it to the best private universities you can imagine, where members are cloistered away from the Saecular world, spending their lives (from youth, sometimes as babes) devoted to learning science and/or philosophy, unburdened (mostly) by religion and technology.  It’s the haves versus the have nots, in a strange kind of way.  The Saecular’s possess all things material, except intelligence.  The Maths wield all the intellect, and few material possessions.  Which is more valuable in the long run?  Which is more valuable when the shit hits the fan? 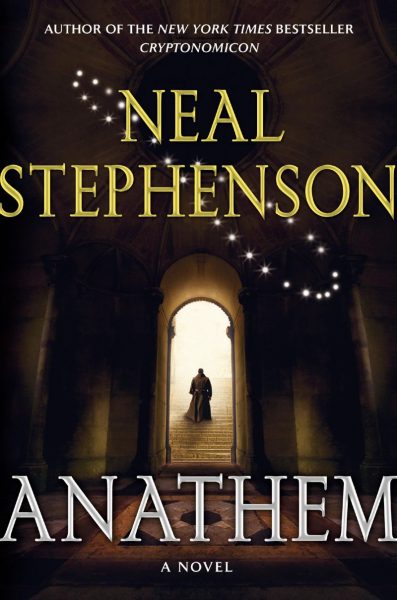 For ten years Fraa Erasmus, a young avout, has lived in a cloistered sanctuary for mathematicians, scientists, and philosophers, protected from the corrupting influences of the outside world.  Before the week is out, both the existence he abandoned and the one he embraced will stand poised on the brink of cataclysmic change — and Erasmus will become a major player in a drama that will determine the future of his world, as he follows his destiny to the most inhospitable corners of the planet . . . and beyond.

And when the Saecular world has a very difficult problem to solve, they call on the Maths who then send appropriately trained representatives into the real world (extramuros) to help solve those problems.  That’s exactly what happens when an alien starship suddenly approaches Earth and enters orbit.  A young Fraa Erasmus is flung from the cloistered protection of his Math into the foreign Saecular world in an attempt to understand if the new visitors are friend, foe, or something entirely unknown.

But the novel goes far beyond alien contact.  It delves into concepts of alternate timelines and how information/ideas travel between Hylaean Theoric Worlds, causal domains, multi-cosmi, and other fascinating but brain aching concepts.

One of the problems with Anathem is the pacing, which is not unexpected when you dive into a near 1000 page behemoth of a novel, and certainly not unexpected from a Stephenson novel.  It takes fully 300 pages for the book to get moving.  I call it a 300 page prologue.  Neal spends a significant amount of time on seemingly needless thought experiments and discussions between characters that really has very little relevance to the first contact scenario that later unfolds.  It’s as if he were just typing out self satisfying philosophical conversations he was having with himself in his head.

One of the larger complaints with Anathem is Stephenson’s liberal use of made up jargon.  You’ve seen a bit of it scattered through the text above.  The story doesn’t take place on Earth, but on Arbre a world that strongly parallels Earth.  I have no issues with the language and made up terms.  There’s a very large glossary in the back, and it took me “only” 100 pages of reading to become acclimated to the terms.  After that I referenced the glossary rarely.  But it’s there for a reason.  Readers who complain about the made up terms within the pages of Anathem clearly skew to the lazy side, and probably shouldn’t be picking up a Neal Stephenson book in the first place.  It’s like saying you hate seafood, then going to a restaurant and complaining when you order yourself a platter of raw oysters.  The interesting aspect of this jargon complaint is that Anthony Burgess used many, many times the fictitious words that Stephenson uses, yet A Clockwork Orange is lauded as a literary classic.

Anathem is a juggernaut of speculative fiction; just weird and alien enough to be compelling; just smart enough to be intriguing; just dense enough to prop open even the heaviest of industrial strength vault doors.

If you’re a long time fan of Stephenson you’re safe to read Anathem, and I grant you full authorization to do so, assuming you haven’t already.  If you’re new to him, do not start with Anathem.  I’m warning you, this novel will probably turn you off from Stephenson for life.  You’ll start it and immediately begin wondering “What’s going on and where is this going?!” . . . after 500 pages.  He’s an author you need to acclimate yourself to.  Start with Zodiac (a techno-thriller) or Snow Crash (a cyberpunk adventure), then work your way up to works like Cryptonomicon and Anathem.  But if you have the patience, the fortitude and a penchant for mind blowing ideas, you’ll eventually come around and become a life long Neal Stephenson fan.

For those interested here’s a video trailer for Anathem.