How can you be happy in this world?  You have a hole in your heart.  You have a gateway inside you to lands beyond the world you know.  They will call you, as you grow.

I rarely give works of fiction five star reviews.  To earn such, a book needs to go far beyond telling me a good story, well past regaling me with amazing concepts, and above and beyond populating it with living characters.  A five star work of fiction needs to touch me in some way.  Offer me epiphanies and realizations that I’ve yet to discover or have ignored during my life.  Teach me something about myself.

It’s strange that two books that I’ve given five star reviews to where both written by Neil Gaiman, and both were written for a young adult audience.  The Graveyard Book was written specifically for young adults, while The Ocean at the End of the Lane has the voice of a young adult novel, but is accessible to all, having adult themes skimming just below the surface the entire time.  I’m not a Neil Gaiman fanboy.  I’ve never read his The Sandman comics and I thought American Gods was pretty average.  But there’s no denying that Gaiman has a way with words that can, at times, affect even stodgy farts like myself. 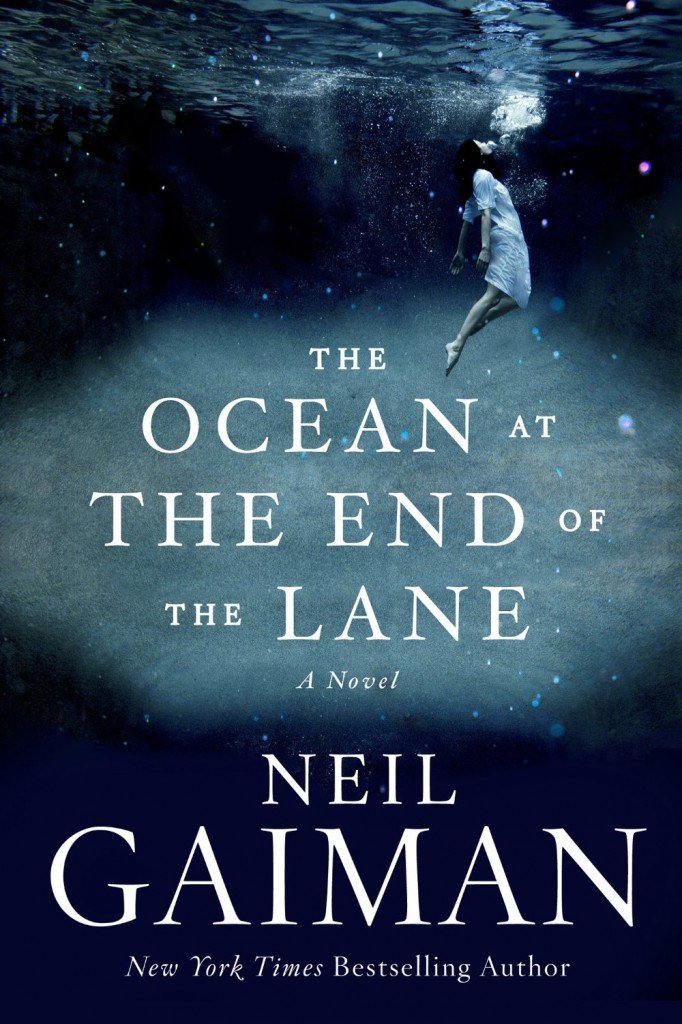 Excerpt: “I do not miss childhood, but I miss the way I took pleasure in small things, even as greater things crumbled. I could not control the world I was in, could not walk away from things or people or moments that hurt, but I took joy in the things that made me happy.

Adults follow paths. Children explore. Adults are content to walk the same way, hundreds of times, or thousands; perhaps it never occurs to adults to step off the paths, to creep beneath rhododendrons, to find the spaces between fences.”

The Ocean at the End of the Lane is a story of childhood, loneliness, sacrifice, suicide, suppressed memories, and how the choices you make impact the people you know and love . . . for good or ill.  It’s a lesson about how children are brave, open, and explore; while adults are scared, closed, and follow paths.  It’s an allegory of how easy it is for darkness to unsuspectingly and insidiously invade our lives, how the freedom and imagination of children allow them to cope with the traumas of life, while these two traits are eventually beaten out of grownups, making it sometimes hard to cope with trauma.  It’s a message that the choices of your past can affect those you love, but being a human isn’t a matter of receiving a passing or failing grade based on those choices.  Being human is not digital, black/white, pass/fail . . . it’s an analog of grey.  As a human you can try to right those wrongs, replace the black with white, make your life (and those you’ve affected) worth living, worth moving on, and you worthy of their love.

The role of books is important to the main character of this novel, just as it was to me when I was a kid.  Books are (mostly) safe places.  Places to lose yourself, hide yourself . . . or find bits and pieces of yourself that you can eventually jigsaw together to create the person you are.  Much of what I learned about people, their values, and how they behave also came from books, perhaps to my own detriment, but that’s the reality of it.  Intelligent and lonely kids soak up knowledge by any means necessary.

Gaiman doesn’t teach us these lessons in a normal manner.  Below the surface Gaiman feeds us his quirky peak behind the curtain of a dark, creepy and fantastical world populated by reality devouring “hunger birds,” lonely monsters, thoughtless grownups, and caring immortals.  He paints a foggy picture of a shadow world that is veiled behind the curtain of a fairly mundane contemporary setting.  Is it a world fabricated by the imagination of a young boy going through a troubling time?  We’ll never know, because Gaiman never fully pulls back that curtain.  Why should he?  Doing so would reveal too much and remove some of the mystery behind the storytelling that makes his voice so special and fascinating to everyone from young adults to fully grown adults.

Read The Ocean at the End of the Lane as a dark fairy tale with the brave and open eyes of a child, but realize that there are themes and messages spread throughout for us scared and closed adults who have all suffered through adolescent pains.

Review: In the Ocean of Night by Gregory Benford