The great city on top of Terran

Following the Transcendence Wars (2300-2310 CE), Terra became an inhospitable world compared to its pre-war state. Regardless, huamnity was forced to eek out an existence there with most survivors of ... More Techspire

Placeholder Faction: Transcendentalists Exists in: Realspace Header Image The Techspire and Tangle, Composite A.I. Generated More is known as Pinnacle City. At its peak it is three miles above the Zone … what remains of the Terran surface. At this elevation Spirelings are protected from inhospitable conditions by a low power nullfield surrounding the city.

All points off (and on to) Terra

Following the Transcendence Wars (2300-2310 CE), Terra became an inhospitable world compared to its pre-war state. Regardless, huamnity was forced to eek out an existence there with most survivors of ... More lead through Pinnacle City via craft shuttling Triocracy

When the entirety of Earth was plunged into literal darkness and chaos in the years following the Cold Boot, humanity reverted to its most base form ... survival of the fittest and strongest. The near... More Citizens to and from orbit. All trade and off-world products are also move through Pinnacle City. No craft, especially private non-Triocracy controlled craft, are allowed to enter Terra’s atmosphere anywhere else but close proximity to Terran Techspire.

The Infinispace data stream is projected from the top of Pinnacle City to a relay station in orbit, Pinnacle Station. From there it is projected via Nullspace 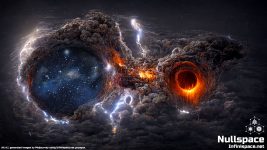 Belief in a reality is only a figment of an interpreted perception. The world of the Triocracy is one in which a Citizen can quickly find themselves lost, wandering paths of illusion and deception if ... More to all corners of the Triocracy. The infrastructure and technology for the entirety of the Continuum 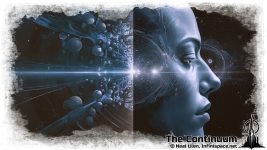 The Continuum is the greater fabric of the Triocracy's alternate reality. Within this Fabric resides the ability for data communication as well as, if rumors are true, the ability for matter transfer ... More and Infinispace resides within Techspire 1 and Pinnacle City. An orbital elevator is also available that can ferry passengers to the orbital relay station and then to Triocracy transports to other systems. The orbital elevator rides the Infinispace beam into orbit on Nullspace perturbations induced by the massive, high powered data stream.

The term "Tangle" refers specifically to the mass of humanity on Terra that resides between the three mile tall Techspire and the Barrier which acts as the final dividing line between the Tangle and t... More Citizen is allowed in Pinnacle City unless via the Outerworlds Lottery. All Spirelings are allowed to visit, but only the wealthiest and privileged among them are allowed to live there. Several hundred thousand of the Spire’s most elite reside in the many tiers and levels of the opulent Pinnacle City.