In 342 DE (2652 CE) a non-Terrestrial device was found nestled in the Lagrange point between Callisto and Jupiter, orbiting the gas giant in tandem with Callisto. Even though the large spherical devic... (Sol Non-Terrestrial Anomaly) which had crashed into the surface of Mars after breaking away from Deimos Fortress 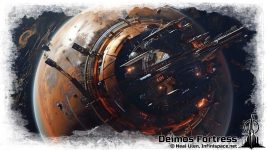 A human colony built on/in Mars' moon of Deimos well after the War of Deception against the Vek and the collapse of the Triocracy (circa 320 DE). Deimos Fortress acted as a proxy military base for the... containment. The base houses approximately 200 research and recovery workers as well as facilities needed for them to conduct their work.