The term "Tangle" refers specifically to the mass of humanity on Terra that resides between the three mile tall Techspire and the Barrier which acts as the final dividing line between the Tangle and t... More Exchange, A.I. Generated

Preceded by Void the Light – Part 4.
A low buzzing pierced the darkness. This was quickly replaced by a loud droning. When it seemed to reach an unbearable crescendo Martos 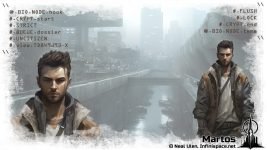 A maze of moving legs. Faces staring down at him in apprehension as the market crowd bustled by.

He sat up slowly, righting the market’s orientation in his eyes. He was beside a trash strewn wall meaning someone had moved him after the Integrators

Integrators are organimechanical constructs of the Triocracy that are deployed in any location where Citizens have to be monitored or subdued. They are also used by the Triocracy to communicate with a... More had retreated. Probably because that person or vendor had found his presence unwholesome for sales. This time when he reached up to inspect his face he did find ruin and pain. Dried blood caked half his face and hair, and one of his eyes was nearly swollen shut.

Martos propped himself up and leaned against the wall watching his fellow citizens glare at him as they passed. Looks of fear, disgust, sympathy, and yes, even apathy hung upon their brows. But not a single soul made any effort to help him in any way, even the sympathetic ones. They knew better than to interfere.

The archaic chronometer he pulled from his pocket indicated that nearly six hours had passed since he first entered the market.

With great effort he pushed himself to his feet while still gazing at the chronometer in disbelief. That’s when he noticed the Mark of the Triocracy

When the entirety of Earth was plunged into literal darkness and chaos in the years following the Cold Boot, humanity reverted to its most base form ... survival of the fittest and strongest. The near... More on the back of his hand next to his anachronistic timepiece.

He rubbed furiously at the Mark, but to no avail. It was permanently affixed to his skin. Or was it under the skin?

So, I’ve literally been branded an outlaw, he thought to himself. Martos looked closely at the Mark that was composed of three linked circles in the shape of a triangle. One of the circles was black, while the other two, representing the other two legs of the governing Triocracy, were not. The significance meant little to him at that moment. The design shimmered on the edges with a slight blue glow, as if alive. He had heard of the Mark, but knew little about it other than it was the end of him, but there was no doubt he was being monitored.

Gasps began to emanate from the nearby throng. He looked up to see some citizens stopped and pointing at him as he inspected the Mark upon his hand. This is not good, he thought, move Martos move!

He pushed himself to his feet and the onlookers backed even further away as if he carried some communicable plague. They scattered in panic when he plunged into the market crowd on his way to Benize’s stall.

Martos propped himself up and leaned against the wall watching his fellow citizens glare at him as they passed. Looks of fear, disgust, sympathy, and yes, even apathy hung upon their brows. But not a single soul made any effort to help him in any way, even the sympathetic ones. They knew better than to interfere.

It had been a most trying day for Benize 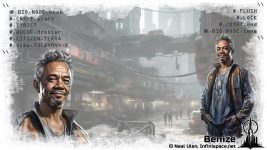 Summary: Benize-73CQ4M44-X, a Terran Triocracy Citizen under the protectorate of the Techspire. Citizen has been involved in many legal and illicit enterprises since a child. Possesses slightly above ... More.

The unfortunate incident with Martos had weighed upon him for hours and he’d found it difficult to concentrate on his wares and customers all afternoon. But there was nothing he could do to help the unfortunate boy at this point. What was done was done, and he could not undo anything the Spire

Spires is a term for the more specific Techspire, Warspire, and Lorespire that are the three arms of the human Triocracy. In a broader sense a Spire is the center of power on a given planet and/or sys... More chose to do against its citizens … justified or not.

Benize made preparations to close his stall for the day, making a few final sales, when a familiar figure stumbled out of the crowd.
“Martos! My god, your face!” Benize stared at the bloodied face of Martos as he stopped and leaned against the stall, breathing heavily.

“I fell when the Integrator

Integrators are organimechanical constructs of the Triocracy that are deployed in any location where Citizens have to be monitored or subdued. They are also used by the Triocracy to communicate with a... More shot me. I’m mostly okay.”

“Here, let me help you get cleaned up.” Benize grabbed a nearby patch of cloth and poured water on it from a nearby decanter. He began to hand it to Martos but he stopped short when Martos extended his hand to accept it.

“What is it?” Martos inquired. He snatched the dripping cloth from Benize’s frozen hand and began cleaning his bloodied face.
Benize took a step back and eyed the now oblivious crowd warily. “You must leave me, now!”

“Why? Is it this?” Martos held up his marked hand towards Benize, thrusting it towards him to emphasize his sudden annoyance.
Benize busied himself closing this doors of his stall and ignored Martos’ display.

“Does this frighten you Benize?” Martos finished cleaning his face, then wrapped the cloth around his marked hand to hide it from inquiring eyes. “It should. Because you had something to do with this! You sold out Taria 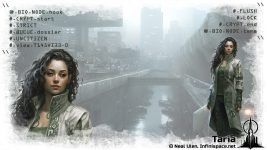 Summary: Taria-T145VI33-O, a former Triocracy Citizen under the stewardship of Techspire, Terra. Citizen possessed much higher intellectual aptitude than average, and was assigned advanced training. U... More and I to the Spire to line your filthy pockets. You’re no better than them,” it was his turn to point to the sky, “you greedy bastard! I ought to kill you right here and now, I’ve got nothing to lose!”

Benize, who had continued to ignore Martos, suddenly turned and pointed a finger at Martos.

“No! I had nothing to do with this. I’m your friend, and I only tell you this because you were careless! The fault is your own. You cannot hide from the eyes of the Spire forever.” He turned and closed the final lock on his stall. “But the friendship must end now for both of our sakes!”

With those words of finality Benize shrugged past Martos without so much as a final glance and vanished into the throng.

Martos couldn’t move. His feet and arms had become leaden from the sudden sense of isolation he felt. His worst fear since seeing the Mark had been confirmed by Benize. He and Taria were alone. They could rely on no one for help at this point. They were outcasts to all: friends, family, citizens, Spire. They could only rely on each other in the very short future they had left.

Reality began to come back in to focus.

He could feel his heart beating faster and his limp limbs came back to life.

The crowd parted for him as he spun on his heels and plunged headlong into it at breakneck speed.

Continued in Void the Light – Part 6.