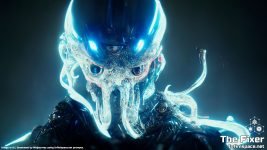 The Fixer is a former Spireling who now plies his unconventional trade in the back streets and black markets of the Tangle, and in the endless realms of Infinispace. His original origins are shrouded ... More pulled himself over the lip of the building’s roof and de-cloaked. He looked over his domain … Möbius City … Freehaven

Freehaven, also known as Möbius City, is the only sanctioned city within Infinispace. It is overseen and managed by the Triocracy (specifically the Techspires). Like almost all of Infinispace it's pr... More … gathering place for all the rabble and freeloaders looking to worm their way into the more exclusive corners of Infinispace.  The virtual city lights stretched to the horizon before and behind him, all of it an illusion of course, caused by the finite nature of the city.  Travel down one of the main thoroughfares at Street City 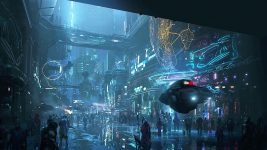 The magnificent Infinispace city of Freehaven has many vertical canopies to its structure, allowing for the virtual residences of its visitors as well as Obscurum. The space for services required for ... More level and eventually you’d find yourself back where you started, passing the same building, gaudily glowing sign, or freeloader on the corner begging for a dream.  It may take hours to circle Möbius City, but there were only two ways to leave it: back to reality or onward to a dream of your own making in Infinispace.

Collectors are exclusively tools of Techspires, acting as their enforcers of edicts and policies. Their activity is often, but not always, linked with automated Integrators that first locate and subdu... More. Gravedigger

Persona unknown . . . entry redacted . . . ████ ██ █ ██ ██ ████ ███ █ appearance ████ ███ ██ ████.  ████ ██ ███ █... More better goddamn pay up. This avatar heist started out as a cakewalk, but quickly turned into a shit sandwich. No matter how honest they claim to be, people with money have their own shady resources and agendas. Even pissed off honest people will not hesitate to exact a little criminal retribution if they are desperate. A rich narcissist can get pretty desperate when their identity has been stolen in Infinispace.

There’d be hell to pay if that scrawny little fuck didn’t show up for the drop. The Tormentor again materialized in his hand.
Note: Continued in Shit Sandwiches.