Visit the virtual paradises of Infinispace. Journey between the stars via hellish Shellspace. And join the battle in Warspace. All spaces are open to you! Tales, short stories, vignettes and world building from my upcoming Infinispace novels … and beyond.

“O God, I could be bounded in a nutshell and count myself a king of infinite space, were it not that I have bad dreams.”
~Hamlet A2.S2

How to Make Neill Blomkamp’s Alien 5 a Success

Neill Blomkamp, the director who has given us District 9, Elysium, and the upcoming Chappie, has been busy in his spare time.  He’s a fan of the Alien franchise and he’s been working with artists in his “spare” time to create concepts for a new Alien movie (see gallery below).  His original claim is that he was just doing it because that’s what he loves to do . . . but I believe he is a master troll.

He trolled Fox, hard.  He released the concept art with a virtual shrug of his shoulders, and the fans went rabid.  Fox took notice and the next thing you know Blomkamp posts this on Instagram: 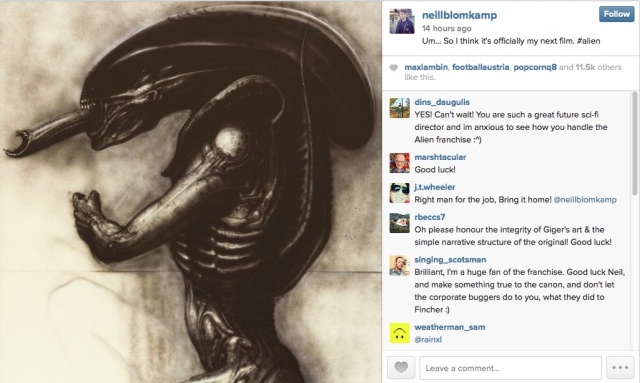 I’m excited, as should everyone who’s a fan of the Alien franchise and science fiction.  But let’s temper that excitement with a bit of reality.  Blomkamp has an uphill battle I wouldn’t wish on anyone!!!  Here’s what Blomkamp needs to do for Alien 5 to be successful, no matter what story direction it takes:

So there you have it.  Let me know what you think needs to be done for Alien 5 to bring this franchise back to life.  And let the speculation begin!

© 2015-2020, Neal Ulen. All rights reserved.
All images/videos cited copyright to their respective owner(s).

He Said, She Said: Chappie Review