Review: The Hour of the Dragon by Robert E. Howard

In 1936 Robert E. Howard tragically put a gun to his head and ended his own life upon hearing that his beloved (and terminally ill) mother would never come out of her final coma to speak to him again.  He was 30 years old.  His mother died the following day.

Howard was a struggling writer who still lived at home and was scraping together meager earnings by writing fantastical fiction for the popular pulp magazines of the day.  Ghost Stories, Action Stories, Fight Stories, Oriental Stories, and Spicy-Adventure Stories.  But his most famous connection was with the financially troubled pulp magazine Weird Tales, with whom he had his most success.  While Howard wrote many tales consisting of westerns, boxing, historical, horror, and oriental themes, he’s best known for essentially creating the genre of “sword and sorcery” with his writings of Kull and (more notably) Conan.

From 1932-1936 Howard published seventeen Conan novelettes and novellas (four additional stories were published posthumously).  The toggle box below lists all of the original Conan stories written by Robert E. Howard.  If you read a book/story that doesn’t have a title listed below and/or doesn’t list Howard as the sole author, it was written (or edited by) someone else.

Only a single, original Conan the Barbarian novel was ever published.  That novel was The Hour of the Dragon.  It was in the process of being serialized in Weird Tales when Howard committed suicide on that fateful day in early 1936.  It has also been published (somewhat disrespectfully) as Conan the Conqueror by Gnome/Lancer/Ace, as well as being slightly reworked/edited by L. Sprague de Camp to fit into the larger Lancer/Ace Hyboria milieu.  Again, if you want to read the unaltered version make sure you read it as The Hour of the Dragon with Howard listed as the sole author.

But how is R.E. Howard’s only full length Conan novel?  Everything you’d expect from the author and character who help define a genre . . . but not without flaw.

The story starts with the resurrection of the 3000 year dead Xaltotun, a wizard of high power and wisdom from long dead Acheron.  A group of royal upstarts are looking to depose one King Conan from the throne of Aquilonia, and put the puppet Valerius in his place.  To do this they use the artifact that gave Xaltotun his power in Acheron . . . The Heart of Ahriman, a glowing gem of untold powers.  Xaltotun helps the upstars by defeating Conan’s army and taking him prisoner.  Subsequently Conan must go on a quest to find the “heart of his kingdom” which also ends up being the Heart of Ahriman that the upstarts decide to destroy lest Xaltotun have too much power over his conspirators.  But here’s where the problems begin. 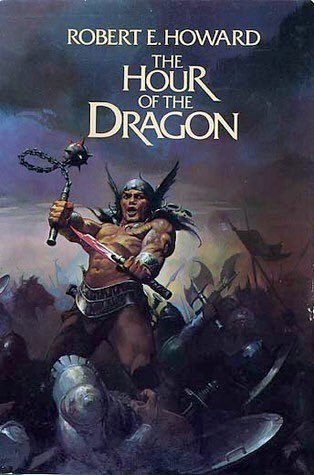 An ancient evil 3000 years old is resurrected to help wrest the crown of Aquilonia from Conan’s brow.  Alone and pursued he journeys across the face of Hyboria to find the “heart” of his kingdom.  During his quest he must overcome nameless evil and the human cunning of his pursuers to restore himself as King of Aquilonia.

The Hour of the Dragon by Robert E. Howard

Supposedly Xaltotun is the most powerful wizard Conan faced in all of his adventures, perhaps the most powerful in ancient Acheron and in Hyboria when he is resurrected 3000 years later.  From the story of The Hour of the Dragon you’d never reach that conclusion.  The reader expects him to be Conan’s primary antagonist, but he makes a brief appearance at the beginning and end of the novel.  Any mention of him in between are furtive references to him slumbering in the powerful clutches of Black Lotus, or hearing horrific screams coming from his chambers, or other obscure and vague references.

Instead Conan’s trials are against a myriad of minor character obstacles:  a man-eating ape, ghouls, a witch with a giant wolf as companion, a former merchant with whom he did past dirty work, a vampire, some nasty priests of Set, etc.  There’s no single, really nasty antagonist for Conan to fight directly against.  Instead the story focuses on his quest to find the Heart and those characters/creatures who are opposing his efforts.  Even at the end (SPOILERS!) Conan himself doesn’t defeat Xaltotun.  Inherently there’s really nothing wrong with this, because it still lends itself to action that was expected in this new sword & sorcery genre.  But the payoff of Conan facing Xaltotun face to face, snarling that he’s a “filthy dog” and then cleaving him satisfyingly in twain from shoulder to crotch never happens.

Howard’s prose is bombastic and colorful, blood and guts, with many expletives of Crom!, and Conan taking shit from no one.  This is a byproduct of the fanbase of the time who devoured the pulp rags of the day (Weird Tales et al.).  The amazing thing I find about the science fiction and fantasy writing that originates from 1920-1940 is that an author can convey entire novels in 150-250 pages.  Today it seems impossible for an author to keep anything under 6 books or 6000 pages.  In all honesty Howard could have trimmed a little from The Hour of the Dragon.  There were various bits involving details about army building and their movement that was unnecessarily detailed for my tastes.

Another downside of reading books from this era is they usually contain elements of racial and sexist attitudes.  The Hour of the Dragon is no exception.  Most characters of dark skin are portrayed as slaves, dimwitted, or criminal.  Most females are portrayed as subservient, lustful, and usually unclothed.  This is sort of a “sign of the times” and “goes with the territory” thing.  Some of the attitudes in early 20th century science fiction and fantasy are cringe worthy, but that doesn’t mean we should ignore the works and the influence they’ve had on literature and storytelling.  If you’re to read one work of Conan to try to understand the creation of a genre . . . The Hour of the Dragon is probably that work.

The text reviewed in this article is the exact, original text published in Weird Tales in 1935/1936.  It captures Conan at the height of his physical and political power, when he’s in his 40s and King of Aquilonia.  It also depicts him at his most powerless.  A barbarian stripped of crown, country, and allies . . . and that’s when Conan is in his element, and at his best, roaming the steppes of Hyboria surviving on the merits of his own sword arm and wits.