Gateway by Frederik Pohl is a simple story about a complex man that takes place in a setting that lends itself to a myriad of adventures both enriching and terrifying…usually the latter.  In the case of down and out Robinette Broadhead it leads him to roll the dice on living the life of a “prospector” in space and leads him to a mission that results in a life of opulent wealth, as well as soul-wrenching guilt.

The book begins with Robinette (Bob) undergoing psychoanalysis under the care of an artificial intelligence that he not so fondly refers to as “Sigfrid von Shrink.” Bob is wealthy and happy…or so he keeps telling himself, but Sigfrid doesn’t believe him.  Deep down in his soul, Bob doesn’t believe himself.

Bob begins reliving his story and the circumstances that led to sitting on a mat in a skyscraper talking to an AI about his problems.  As a young man, Bob worked as a shale miner in Wyoming, the same occupation his mother and father held.  It’s a dismal existence, but the only one they know.  He lives much of his life underground in dirty, miserable conditions with little hope of a different future.  His father died in a mine accident when he was very young.  He then developed a psychological problem and was put away for a year.  During this time his mother also died.  He returned to work in the shale mines, with an even more bleak future staring back at him in the hot, deadly tunnels.

Then Bob won a lottery.  $250,000.  Not a lot, but enough to live well for a short time, or enough to buy a one-way ticket to Gateway to become what he’d always dreamed of being…a “prospector.” 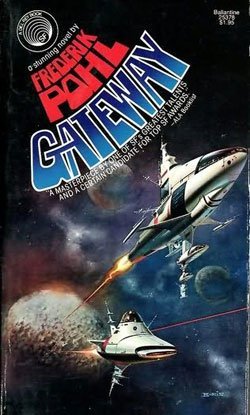 “Rich man . . . dead man.  Those were the choices Gateway offered.  It opened on all the wealth of the Universe . . . and on reaches of unimaginable horror.  The humans who rode the alien Heechee spacecraft stored on the planetoid couldn’t know whether the trip would make them millionaires or corpses.

Would any of us make the choice to strap ourselves into an alien ship not knowing where it would take us, or how long we would be gone? How do you mentally prepare for such a journey other than to assume you are going to die?”

Gateway is an enigma to humanity.  It’s a hollowed-out asteroid that holds approximately 1000 small ships left behind by a race called the Heechee.  No one knows why they left, where they went, or why they left behind all the ships.  (Note:  The Heechee are explained in a later sequel, but there’s no requirement to read later novels to fully enjoy this one!)  The Gateway Corporation was established, and it was soon discovered that all of the ships were pre-programmed to destinations somewhere in the galaxy…but one didn’t know the destination until one locked themselves in a ship and hit the launch button.  The ships used an autopilot system to navigate, would debark to a destination and (sometimes) return to Gateway. Trips took weeks or months…sometimes years (resulting in starvation obviously) depending on the ship taken.  Whatever was discovered on the other end entitled the pilot(s) to a cut from the Gateway Corporation. The people who rolled the dice on Gateway are called “prospectors.”  Prospectors either died or never returned or became wealthy from their exploration of the galaxy.  Death was the predominant result.  Future uncertain indeed.

Would any of us make the choice to strap ourselves into an alien ship not knowing where it would take us, or how long we would be gone?  How do you physically prepare for that other than stockpiling as many supplies into the small ship as could possibly fit?  How do you mentally prepare for such a journey other than to assume you are going to die?  This was usually the mindset Bob had, and the theme that a person can become lost and desperate enough to even contemplate making that decision runs throughout the book.  But when the ship arrives at its destination and crews realize that they have enough food/oxygen to return home…the exuberance and welling of life coming from the characters is almost palpable.

This is the path Bob Broadhead chose because he felt it was better than the one he left.  Gateway is also a place where Bob seemingly beat the odds to survive and become incredibly wealthy.  We know the endgame on the first page of the book.  But we don’t know the journey to that endgame until we read the last page.

Gateway alternates chapters between Bob being psychoanalyzed and flashbacks to Gateway.  The plot threads meet up at the and we learn what happened to Bob and why he’s paying for a shrink.  The novel is sprinkled throughout with multi-genre elements such as lines of code from Sigfrid, classified ads on Gateway, mission reports, contract summaries, and the like.  These add an exceptional flavor and background to the story without unnecessary and bloated narrative.

The tale that Pohl weaves is mysterious, adventurous, and tragic.  The very ending itself (if one has a rudimentary understanding of astrophysics) is chilling and depressing.  Towards the end of Gateway the reader can begin to understand why Bob is undergoing psychoanalysis and is so angry.

I’ve always believed that Gateway would make an amazing movie given the right script treatment.  But as far as I know, it has not been optioned by any studio.  This is a shame.  It possesses all the elements that would make for a mind-blowing science-fiction drama.  But alas, Hollywood is too busy recycling and rebooting to see the potential.

The Forgotten, the Lost, Lurkers ... they are known by many names, but their officially accepted name is the Obscurum. These are citizens of the Triocracy, with means and reasons, who have chosen to f... More by many, and unknown by even more.  Gateway won numerous awards when it was published:  Hugo, Nebula, Locus, and John W. Campbell awards for best science fiction novel.  To my knowledge, no other book has won all four of these awards…it’s also one of a few that actually deserves them.