I’m back with another review of an epic fantasy novel.

Last time I stopped by I reviewed Dragonlance:  The Fellowship of the Red.  This time I finished Dragonlance:  The Blue Towers . . . I mean Dragons of Winter Night.  I really shouldn’t be surprised any more but The Lord of the Rings similarities keep shining.  Although this time the authors included gnomes, which by the ornament I have in my lawn I’m guessing are smaller than hobbits.  And they do keep adding new creatures like the gully dwarves in the first book.  Does living in a gully make them smell like cabbage?  I don’t know, but I do smell figurine marketing.  Time to bust out the paint sets and tiny brushes.

Okay, spoiler alert.  Fizban (not like Gandalf) is back to life (like Gandalf), although he really doesn’t do much in this book but I expect he will play a larger part in the third.  He’s a very entertaining character so I’m fine with the blatant Gandalf parallels which is good because there are a lot of them.  They both die, but are mysteriously reborn in the second book, with grey beards, pointy hats, you get the picture.  Fizban even seems to favor the small Kender (Hobbits with mullets) species.  Both magic users guide their tiny friends through an adventure with a powerful magical object and there is even a destruction theme.  Fizban doesn’t have a love for the halfling leaf but then again they never really say what “herb” Raistlin frequently drinks for his cough.  So the theme is fantasy characters like to medicate. 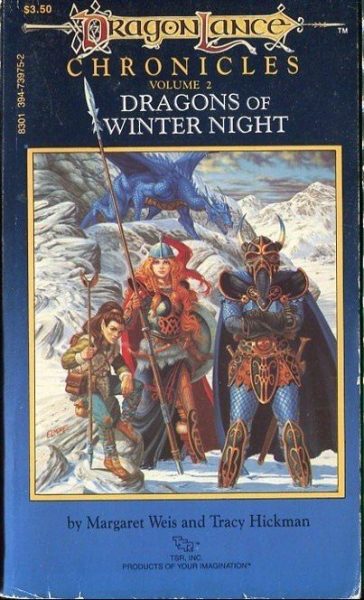 But now dragons have returned to Krynn.  The darkness of war and destruction engulfs the land.  A small band of heroes brings hope to the land.  But the hope is fragile as a rose and may be lost completely, shattered by the bitter winds of winter.

Knight and barbarian, warrior and half-elf, dwarf and kender and dark-souled mage; they begin a perilous search for two artifacts that may help them or lead to their destruction — the Dragon Orb and the legendary Dragonlance.

Character relationships play a big role again in this second book, still more than a typical fantasy novel which adds welcome narrative direction.  Our cast really gets broken up in this one (parallel story lines sound familiar to anyone . . . sorry).  They do a good job of balancing story lines, you don’t feel like you’ve forgotten

The Forgotten, the Lost, Lurkers ... they are known by many names, but their officially accepted name is the Obscurum. These are citizens of the Triocracy, with means and reasons, who have chosen to f... one when they finally switch back to it, yet it also doesn’t feel like it is constantly bouncing back and forth.  There are many more dragons in this book and many lances which surprised me, I expected there to be The Dragonlance not “I need some help carrying this pile of common dragon lances.”  Dragonlances don’t seem all that special enough to name an entire trilogy after.  There was only One Ring after all, with a trilogy named after it.

Anyway, this book seemed lighter on male/female relationships (although there were several) but touched more on Knight society and politics which made for several interesting story lines and new characters.  Characters struggled with their own moral compass and the Knight’s code “the Measure.”  It really touches on the dilemma of how do you do what is right while still holding enough power to control what gets done (hopefully for good).

At the end of the book all I could think is “I can’t believe Neal and Amy named their cats Kit and Tanis.”  I’ll leave out my reason for that surprise to avoid spoilers, but the hints at their relationship in the first book really didn’t prepare me for the ending of the second book.  Seriously when I finished the second book I was like “What the . . . ?” and I plowed 1-2 chapters into the third book just waiting for the “just kidding” magical reboot to the end of the third book.  But to no avail.  More on that in another review.  Speaking of which . . .

So now I’ll continue to power through Dragonlance:  The Return of the Green and save my feelings for the final book review.