I just finished Dragonlance: Return of the Green . . . I mean Dragons of Spring Dawning.  Like I said in my last review I tore into this one hoping for a little reboot magic.  The read didn’t quite go the way I hoped but it definitely entertained.  I guess the lesson learned is don’t bring characters back from the dead in the first book of a trilogy if you’re not going to do equal opportunity resurrection.

Dragons of Spring Dawning is dark . . . very dark, despite the uplifting title that hints at new beginnings, new awakenings, and a new dawn.  It reminded me of the parts in The Lord of the Rings when they were approaching Mordor.  The energy is dark and depressing with a pinch of despair.  I guess it is supposed to make their victory feel that much sweeter.  The bad guys are darker too, which makes you wonder where they were in the first two books if they were so evil.  Perhaps they were hiding in their dark citadels, formulating epic monologues to be delivered over the helpless and supine corpses of our protagonists.  Or not.  They even threw in a few token bad guys just so they can say you think the main antagonist is bad,  Well, forget them, this dude is 10 times worse.

On a lighter side they threw in a not Tom Bombadil and not Goldberry romance (not-medieval-hippy romance).  It added a touch of hope and helped move the story along.  But, just like when Tom Bombadil sent the hobbits off on their way while singing Hey do doner boner, dingle berry ho! you couldn’t help thinking “maybe, you know, you should he have tagged along?” because he seemed like a really powerful ally.  No?  But he’s gone swimming with his girlfriend, okay on with the story!

Fizban was still very Gandalf like but with a very unique spin.  I won’t give it away but there was definitely a major “wait . . . what?” moment.  Where Gandalf was a wise and powerful mage with some quirks, Fizban is still a crazy old wizard with a super powerful fireball . . . what’s that spell again? 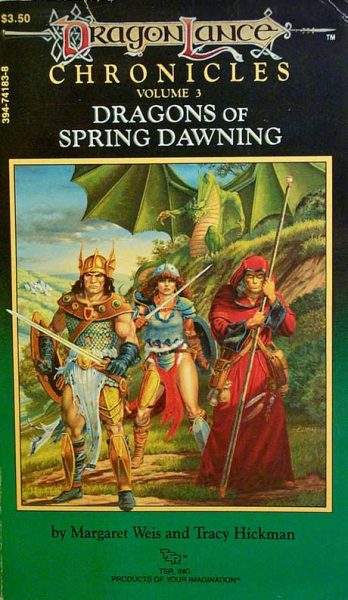 But now dragons have returned to Krynn.  The darkness of war and destruction engulfs the land.  Hope dawns with the coming of spring.  Armed at last with the dragonlances, the heroes lead the people in the final desperate battle against the dragons.

Knight and barbarian, warrior and half-elf, dwarf and kender and dark-souled mage; they must overcome their own doubts and resolve their own conflicts before they can hope to defeat — Takhisis, the Queen of Darkness.

For how many dragons and armies there were in this book I was a little surprised that there wasn’t a big epic end battle. I think they wanted a more character driven “mano e mano” battle.  I mean it’s the Dragonlance Chronicles, you expect that someone would chronicle the lancing of many dragons in SOME epic battle, right?

Okay, now I really can’t believe Neal and Amy named their cats Tanis and Kit.  There must be another book with more backstory . . . oh god more reading!  The romances in this book definitely took an “it’s complicated” approach with lots of give and take leaving some a little bitter sweet.  Although to quote Fred Savage in the Princess Bride “This is not a kissing book.”

I was honestly expecting a major comeback moment for Raistlin like a Neo’s “there is no spoon” moment in the end of the first Matrix, but his comeback (yeah yeah, spoiler) fell a bit flat.  It was more like Obi-Wan Kenobi using his Jedi powers to make rock throwing sounds to distract some guards.  Maybe they were leaving room for him to be badass in another book.  I did like how they gave some closure to the relationship between him and his brother, Caramon, freeing him to chase after his curly red haired and freckled ginger barmaid.

With all my colorful sarcasm this was a very entertaining series. Thanks for the recommendation Amy.