Over the years Dennis L. McKiernan has been accused of borrowing, if not stealing, the settings, themes and many elements of Tolkien‘s The Lord of the Rings.  To that I say:  Then every high fantasy author is also guilty.  Even cursory research will dig up the truth and quell the misunderstanding.

McKiernan was holed up in a hospital after a motorcycle accident and started writing out of boredom   He loved Tolkien’s work so he decided to write a sequel to The Lord of the Rings that told the tale of the dwarves retaking Moria after the War of the Ring.  He finished it and submitted the work to Doubleday…who ended up liking it.  But, the Tolkien estate would not give permission for a sequel to be published (naturally).  So Doubleday asked Dennis to rewrite the book such that the fundamental story is the same (dwarves go underground), but taking place in a different world.

So the misguided have labelled McKiernan as a Tolkien thief when his only crime was being the ultimate Tolkien fan.  His level of mimicry was just more literal (in the beginning) than the average fantasy author.

Since those first books where published, McKiernan moved away from the Tolkien parallels and told stories wholly his own, but obviously still influenced by Tolkien’s pinnacle of high fantasy…like all authors of that genre over the past 60 years.  One of those works was published in 1990 and is entitled Dragondoom. 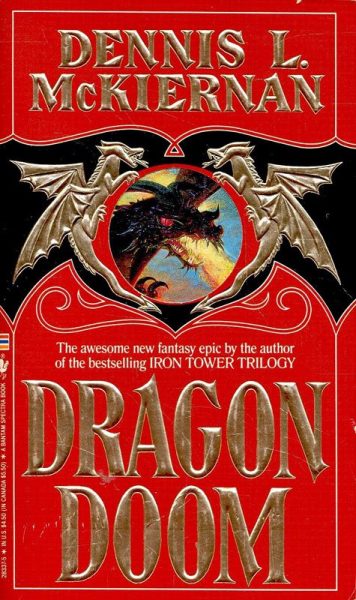 Sleeth’s great yellow eyes slid open; behind crystalline membranes, long slitted pupils expanded wide in the ebon darkness. His great forked tongue flicked in and out, tasting the blackness of the cavern: Empty. Dire spume dripped from wicked fanges, and where it struck, froth sizzled and popped, and rock dissolved. Sleeth’s juices ran high, for he was ravenously hungry, yet this night he would not seek to fill his belly; he was after other prey.

Slithering out from his den, Sleeth crossed the wide foreledge, fetching up against its precipitous lip. Stone fell sheer before him, plummeting down into the black depths far below. Silvery moonlight streamed through black pinnacles behind, pales beams splashing iridescently upon lapping scales — armored hide, virtually idestructible. Great muscles rippled and bunched, and with a roar that struck and clapped among the frozen crags, Sleeth leapt into the air, vast leathery pinions beating upward into the crystal sky, climbing toward the stars.

Circling, spiraling, up and up he flew, till he was high above the clawing peaks. And then he arrowed westward, into the angle of Gron, wings hammering across the night.

All of McKiernan’s fantasy novels take place in Mithgar, yet they are all works that can stand on their own and are not part of an all encompassing series. Dragondoom takes place in the early history of Mithgar (3rd Era), but the chapters jump between the present and the past to craft a masterful adventure.  Jumping between time periods can be tricky, and improper editing or simply shifting chapters to an order different than what was published might have ended up in an ineffective dramatic impact.  Despite all of the time hopping through the Era, McKiernan grounds the reader by placing the year at the beginning of every chapter, and further clarifies it by labeling each year as [The Present], [Last Year], or [Centuries Past] so you clearly know where you stand in the timeline as you begin a new chapter.

At the center of the story are the characters of Elyn (a human) and Thork (a dwarf), whose people are at war with each other over a reclaimed dragon hoard, while at the same time being threatened by another dragon, Black Kalgalath, seeking revenge.  Both embark on a quest independently to find The Kammerling (aka Rage Hammer), a relic powerful enough to defeat the black dragon and the wizard he is in league with.  During their quest they inevitably encounter one another and a tenuous pact ensues.  Enemy of my enemy…friend of mine.  That pact is strained many times over the course of the quest, especially when they discover that one reason the other is searching for the Rage Hammer is so they can each use it not only against Black Kalgalath, but against the other’s race.  As the pair travel across perilous Mithgar in search of the relic their harsh opinions of one another are tempered by shared knowledge, and they discover that the prejudice and war between their people is misguided.  Eventually the pair begin to fall in love and begin to trust each other with their lives.

Interspersed between the chapters of their quest are the aforementioned flashbacks in time that detail Elyn becoming the first warrior maiden of Jord.  Her brother Elgo’s quest to slay the dragon Sleeth and take its hoard.  The war between humans and dwarves over the recovered hoard which was originally stolen from the dwarves by Sleeth.  The return of Black Kagalath to avenge Sleeth’s death.  All this strife is driven by the curse of the dragon gold…the dragon doom.

But in the end Dragondoom really is a story about love, friendship, reconciliation..and the dire consequences of unchecked pride.  All set against a tapestry of sweeping action and exotic locales.  McKiernan is in full stride here.  He broke out of his first derivative novels that were essentially reworked Lord of the Rings sequels and delivered a wholly original and effectively crafted epic fantasy novel.

If there’s one Dennis L. McKiernan book you should read, it’s Dragondoom . . . without a doubt.  And once done you won’t feel bogged down by the necessity to read umpteen novels before or after just to follow what’s going on like any number of current fantasy series that shall go unnamed.  But once read you could happily move on to other works of fiction, or delve in to The Eye of the Hunter and/or Voyage of the Fox Rider.