Before delving in to the Revelation Space universe I first suggest perusing the chronology and consider reading the books in order.

This is Part 3 in my series of reviews focusing on the Revelation Space future history books by Alastair Reynolds.

Diamond Dogs, Turquoise Days by Alastair Reynolds is a collection of two novellas that take place in his Revelation Space universe.  Prior knowledge of the Revelation Space timeline is not required to enjoy these two stories, but it does help with the understanding of Turquoise Days as well as some of the terms used by Reynolds.  But this can easily be remedied by searching for unknown terms online.

The novellas are standalone tales but are connected by a very tenuous mention towards the end of Turquoise Days.  Watch for it.

Diamond Dogs is a play on the idea of a progressively deadly puzzle (eg. death maze). An obsessed man (Roland Childe) has discovered an alien artifact on a remote planet via a secret probed he launched.  He assembles a crew of six individuals to make the lighthugger journey across the galaxy to explore the planet Golgotha.  Each character possesses his/her own particular set of skills that will aid Roland on his quest.

Roland Childe:  Eccentric and wealthy man obsessed with solving puzzles.
Richard Swift:  Obsessed with besting his childhood friend Roland.
Celestine:  Richard’s former wife who has had her mind altered by Pattern Jugglers giving her the ability solve complex problems.
Forqueray:  An Ultra, captain of the Apollyon and possessing the equipment needed to get them to Golgotha.
Dr. Trintignant:  Half machine, half man who revels in experimenting on humans by cybernetic modification…whether they want it or not.
Hirz:  A diminutive, foul mouthed hacker who thinks she’s made the wrong decision.

Once the Apollyon arrives at Golgotha they discover that the alien artifact is instead an alien structure, a 250 meter tall spiraling tower that is not sitting on the planet surface but floating slightly above it with no discernible mechanism to hold its enormous weight suspended in the air.

As the crew begin to approach and explore the alien tower they find the remains of other humans who have apparently come to explore, and met violent death.  At this point they begin calling it the “Blood Spire” . . . and that’s when the fun begins.  The tower is a play on the death maze where each chamber contains a puzzle that must be solved which will lead to another camber further up its height.  But sometimes there’s a penalty for getting a puzzle wrong.  What’s at the top of the tower?  Do they survive to make it?

Diamond Dogs is a very interesting tale about what lengths an obsessed person will resort to in order to satiate that obsession, even if they don’t even understand the motivation behind it.  The lengths Childe goes to (in this future setting) are quite disturbing if you set aside the story itself and ponder his methods.  It’s also a horrifically morbid tale, with little possibility of a happy ending.  Probably the darkest and most grisly story I’ve read in some time. 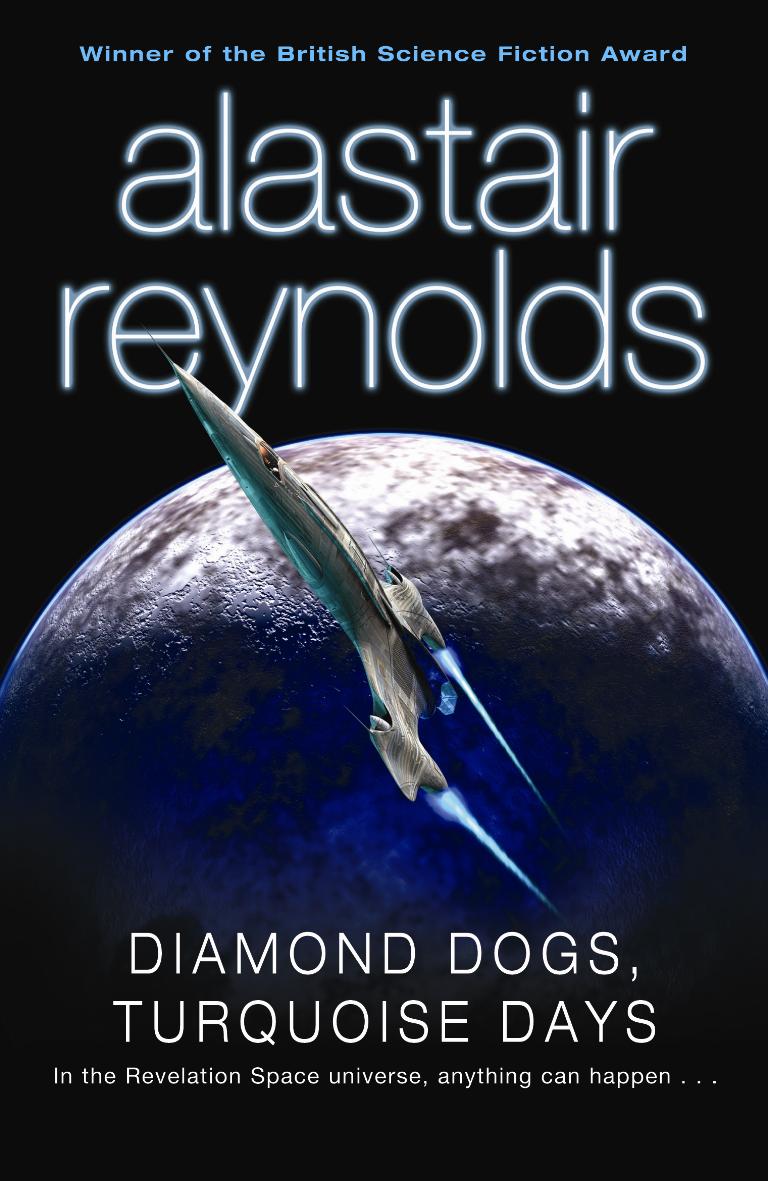 “Diamond Dogs is a very dark and interesting tale about what lengths an obsessed person will resort to in order to satiate that obsession, even if they don’t understand the motivation behind it.”

Turquoise Days is the lighter tale of the two, but only in that it’s less grisly.  By itself it is also a fairly dark tale about cults and mind programming using stored thoughts of the dead.

At the center of this story is the planet Turquoise and the Pattern Juggler colonies that exist in the planet’s ocean.  The main characters are two sisters (Naqi and Mina) who are native settlers doing research on the Pattern Jugglers.  Their routine is disrupted when the lighthugger Voice of Evening (the first ship to visit in 100 years) calls as it approaches the planet and informs the government that they have scientists on board intent on studying the Pattern Jugglers as well.

Voice of Evening is left in orbit and a small contingent of the crew land on the surface and greet the government representatives.  Naqi soon discovers that these visitors are not who they say they are and that they are there for the Pattern Jugglers, but for a different reason.  And the thousands of people waiting in the ship in orbit isn’t exactly normal.  Naqi seems to be the only one willing to confront these visitors to find out the truth.

Turquoise Days shed a lot of light on the idea of the Pattern Jugglers that is touched on in other books written by Reynolds.  Reading it first may not be a bad idea if you decide to delve in to other Revelation Space novels.

I enjoyed both novellas quite a bit, each one weighing in at about 140 odd pages. Reynolds’ writing style in these two tales is quite a bit different than his full length novels. It’s more compact, concise . .  . to the point.  You can tell he wrote these before he became a heavyweight in the science fiction field.

Of the two I found Diamond Dogs to be my favorite mainly because of the theme and the atmosphere.  Reynolds’ unexpected and clever little connection towards the end of Turquoise Days sealed the deal for me.  Those who don’t plan on investing more time in this setting may find Turquoise Days a bit confusing, while Diamond Dogs is straight up readable without needing to dig any deeper in to Reynolds’ universe.