Phlebas the Phoenician, a fortnight dead,
Forgot the cry of gulls, and the deep seas swell
And the profit and loss.
A current under sea
Picked his bones in whispers. As he rose and fell
He passed the stages of his age and youth
Entering the whirlpool.
Gentile or Jew
O you who turn the wheel and look to windward,
Consider Phlebas, who was once handsome and tall as you.

So goes a section of T.S. Eliot’s poem The Waste Land. . . . and it’s a depressing, eye opening, and foreshadowing section from which Iain Banks pulls the title of his first Culture novel, Consider Phlebas.

I placed a spoiler tag at the beginning of this review because curious individuals who pick up the book and think “What a strange title.  I wonder why he named it that?” will quickly run across the Death by Water section of T.S. Eliot’s famous poem, and probably connect the dots concerning Consider Phlebas’ main protagonist, Bora Horza Gobuchul.  That’s right . . . he dies.  And, boom goes the dynamite.  T.S. Eliot reminds us that as we look ahead we should think of the poor fish feeding Phoenician lest we become too proud of ourselves and forget that death is an inevitable finality.

That’s about as deep as Banks’ first Culture novel goes.  There are no discernible Earth shattering epiphanies, nor are there any deep philosophical messages.  The best you can hope to take away from this straight ahead, space opera adventure is a sense of what the Culture is, what it stands for, and what’s being set up for future novels.

As I just mentioned, Consider Phlebas is a fast paced, fist to the jaw, action packed, galaxy spanning, roller coaster space opera adventure (whew!).  The main character, Horza, is flung from one wild situation to another.  It’s full of colorful characters with interesting (and tongue stumbling) names that can present roadblocks to the flow of reading (eg. Jandraligeli, Tzbalik Odraye, etc).  It’s full of sentient starships with equally interesting (but easily pronounceable) names (No More Mr Nice Guy, The Hand of God 137, etc).  It’s full of BDOs (big dumb objects) that lovers of space opera are, well, wont to love (orbitals, see picture in header).  It’s got a smartassed robot AI that reminds me of Wheatley from Portal 2.  It’s full of action sequences narrated in such incredible detail you might begin to understand what a character’s right hand pinky is feeling just as it slams into the rugged, stubbly chin of a space pirate, parting said stubble with the furrows created by the skin on his knuckles.  Yes, I’m exaggerating, but a cinematographer would be happy to film some of these action scenes, because Banks already has them detailed out in his version of 24 frame per second prose.  Banks must have gone into some sort of narrative fugue state when he was writing these passages.

Granted, not all of Consider Phlebas is like this.

But wait . . . there’s more!  You want weird?  Okay you got it.  How about this?  Consider Phlebas has a tropical island that is situated in a massive ocean on an even more massive orbital.  On this island is a tribe of natives ruled over by an mound of talking lard that eats people alive by putting different sets of metal teeth in his mouth depending on if he wants to take bites, flay flesh, or skive the meat right off your bones.  The starving people over which this . . . thing . . . rules don’t get the luxury of eating even human flesh.  Oh no, they get to eat whatever they can find:  dirt, dead fish, and yes, predominantly their own shit and piss into which they stew dead fish.  Uhhhh . . .

That’s the inherent problem with Consider Phlebas.  All the interesting points of Culture society, which we learn about in the background, or via dialogue, are overshadowed by these episodes of detailed action or downright bizzaroworld weirdness. 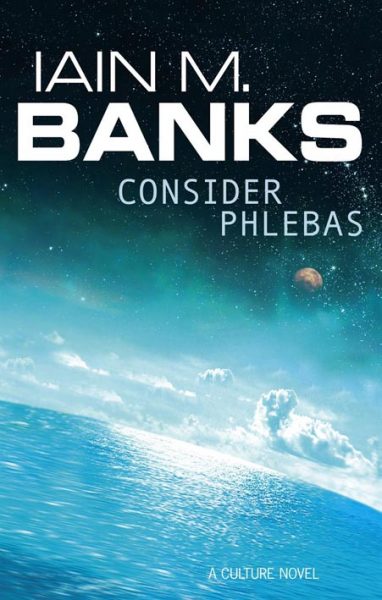 The war raged across the galaxy. Billions had died, billions more were doomed. Moons, planets, the very stars themselves, faced destruction, cold-blooded, brutal, and worse, random. The Idirans fought for their Faith; the Culture for its moral right to exist. Principles were at stake. There could be no surrender.

Within the cosmic conflict, an individual crusade. Deep within a fabled labyrinth on a barren world, a Planet of the Dead proscribed to mortals, lay a fugitive Mind. Both the Culture and the Idirans sought it. It was the fate of Horza, the Changer, and his motley crew of unpredictable mercenaries, human and machine, actually to find it, and with it their own destruction.

The book takes place in the middle of a war being fought between the post-scarcity Culture and the “chaos makes you strong” Idirans.  In essence the Culture is a utopian society populated predominantly by “humans,” which is odd since the book takes place in 1331 AD.  So by “human” I’m assuming Banks means “humanoid” . . . unless something is revealed in later books.  The Culture fights this war because, for wont of a better reason, they are bored and have self worth issues.  Everything is provided for them by their AI Mind overlords, so their idea of a cosmic social program is to meddle in the affairs of other races.  The Idirans, on the other hand, are a theocratic society of aggressive aliens who believe that chaos and strife breed strength, and that’s it’s their god given duty to bring the rest of the galaxy under their yoke of holy rule.  The Culture defy them because, well, they’ve got nothing else to do.  Okay, I’m simplifying it a bit, but that’s it in a nutshell.

Unfortunately the Culture-Idiran war isn’t played out in great detail here, it only serves as a backdrop for a quest undertaken by Horza at the behest of his employers to capture a rogue Culture Mind that escapes the Idiran’s as they march across the galaxy.  Bora Horza Gobuchul is what one might call a morally ambiguous protagonist who actually isn’t morally ambiguous enough to make for a truly dynamic character.  What I mean by that is that he treads that line of ambiguity almost too finely.  There’s not much wavering to either side of good or bad, yet he’s just roguish enough to serve his mission and keep us turning pages to see if he recovers the enigmatic Mind.  The tragic part of Consider Phlebas is that we never find out why they want the Mind, or who the Mind is.  The story comes to an abrupt halt with only a few appendices to try and wrap things up.  Unfortunately the reader never gets the grand payoff that’s set up by all the adventure and trials Bora Horza Gobuchul has to endure to reach the end of his quest.

Consider Phlebas is a fair to middling space opera novel.  Some say that it’s not the best place to start Banks’ Culture series.  Others recommend starting with The Player of Games as it gives a better portrayal of the Culture and what it’s like to be a citizen.  Personally I’ll be following Malvin’s advice from the movie Wargames:  “I figured it out all by myself.  The first book on the list.  Go right through Consider Phlebas.”  And that’s what I’ll be doing over the next couple years.

Be sure to check out my Culture Series page listing all the books and links to my reviews.